I am pretty pumped for this KRK Rokit 7 G4 and Yamaha HS8 battle today. I have looked at the Yamaha HS8 speakers many times over the last few weeks and this time they are going head to head with the KRK Rokit 7 G4 speakers which are going to be a pretty even match I think. These are two very popular “professional” studio monitor style speakers that are aimed at those who are into making their own music. Apart from Guitar Hero and Rock Band, I have absolutely zero musical talent… unless you consider collecting and knowing obscure vinyl record facts musical talent?

I have to be honest and say that the price round in our KRK Rokit 7 G4 and Yamaha HS8 is pretty interesting as these are not too far apart. There can be some great deals to be had for these so shopping around is certainly something you will want to do. 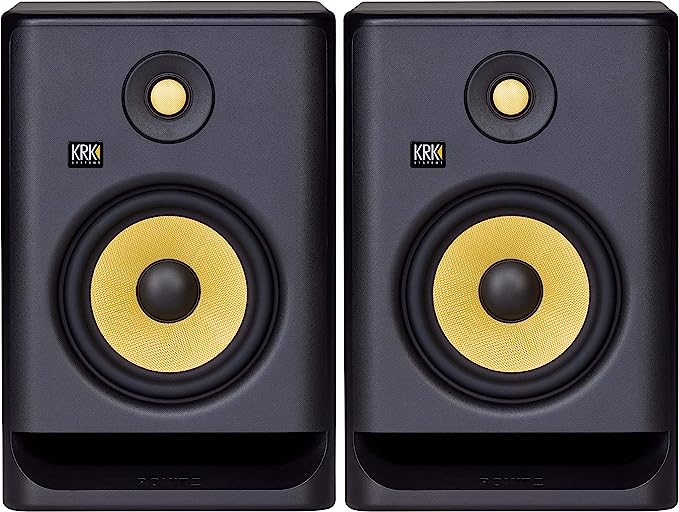 On Amazon, as I write this you can get a pair of KRK Rokit 7 G4 speakers for $498 which in all honesty is not a bad price. The thing is that they also have these listed singularly as well and a single speaker will cost you $239 which is weird as you would technically save money by purchasing two single speakers rather than the pair. You can find these for a very similar price on eBay, but just make sure you are getting a pair and not just buying one speaker. I bet many people see that $239 on Amazon, hit buy it, and then freak out when just one speaker. 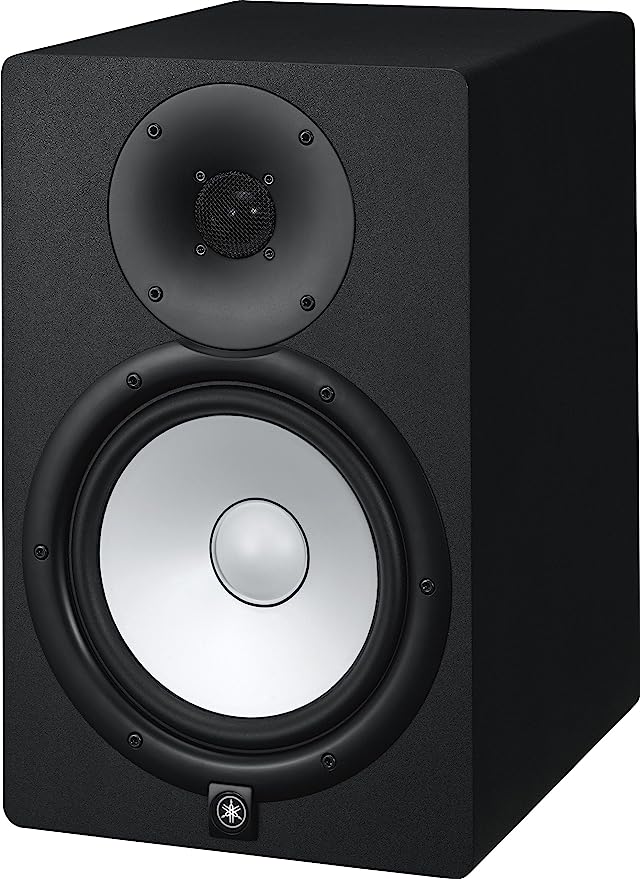 While the Yamaha HS8 speakers have an RRP (I am pretty sure they still do) of $499,99, I cannot remember the last time I saw these at that price on Amazon, they are usually much lower. As of me writing this, Amazon has them listed at $398,99 which really is an amazing price for these. I have seen them be a bit lower before so it is up to you if you want to wait a little bit in case, they drop again. On eBay, these are listed on there quite a lot and in typical eBay fashion, the prices are very erratic. I have seen these go for way over the RRP and also very close to what Amazon is asking.

I really do think that the asking price on Amazon right now for both of these speakers is very fair. However, as the Yamaha HS8 is currently lower priced than the KRK Rokit 7 G4, I am giving that the win. To be honest, I do actually think you are getting more for your money with that speaker and even if they were exactly the same price, I am pretty sure I still would have picked the HS8 as the winner.

I have to be honest and say even as I start the design category here in this KRK Rokit 7 G4 and Yamaha HS8 contest, I am not sure which way this thing is going to go. These are two very different looking sets of speakers, both have their own style and they both appeal to me in different ways.

Before I start with my shtick, check out this (UNBOXING) KRK Rokit 7 G4 Monitors which gives you a good look at these KRK Rokit 7 G4 speakers. These are available in black and white, but it is the black version I am talking about.

These speakers are mostly this very matte kind of black which is a style I really love. The little bit of gold that is also on here is something that on paper I would be sure I would hate, but it works very well and gives these speakers some serious soul and style about them. The build quality is very high and out of the box, you will be impressed with how solid and impressive they feel. The dimensions of these speakers are 29 x 18 x 15 inches and at 34 pounds they are probably way heavier than you would think they would be. As a showcase set of speakers, these really are something that I am 99 percent sure many people will think is really cool.

While the front is great, the back of the KRK Rokit 7 G4 speakers is what really is going to blow your mind. You have a volume and a “balanced input” dial on the back near the top and in between these is a graphic equalizer that you can use to play around with and tinker with the sound! This thing is awesome and I am scratching my head trying to think of another set of speakers that have this on the back of them? Of course, it being on the back means you will have to pull these out when you want to play with it, but it is something that I think is very cool to play around with, and in all honesty, I am sure for music production having something like this on the actual speaker is going to be pretty damn handy.

I have talked about the Yamaha HS8 speakers a great deal over the last couple of months and have had a great time doing so. There really is not much else I can say about these speakers, except that they are awesome and have a real 80s style about them which I am a massive fan of. While they do come in white, the version I am specifically talking about today is the black speakers. These are considerably lighter as they come in at 23.5 pounds. The size of these is 13.1 x 9.8 x 15.4 inches which means that they do not require a whole ton of space in your home or home studio. I love the whole aesthetic of these speakers. I think the two tones of black and the little bit of silver-white (my wife and I argued over what the color actually is) give this a very stylish kind of look that I would happily have put on display in my home.

On the back of the Yamaha HS8 speakers, you have two input ports, you also have a switch dial, a high trim dial, and a room control dial. There is a power port and the power switch towards the bottom of the speakers. They have kept the back of the speaker very clean and easy to figure out and that is something I am sure people will appreciate. Actually, the back of this speaker is pretty much identical to all of the HS range from Yamaha and people seem to love the style of this range and the HS7 and HS8 look near identical apart from the logo with the model number which is at the top of the speaker.

I have to say that this is a really tough one to call. I love the whole HS range from Yamaha and think that the Yamaha HS8’s dimension makes them the best out of the bunch. However, I just love the way the black and gold of the KRK Rokit 7G4 goes together and that graphic equalizer on the back is one of the coolest things that I have ever seen on a set of speakers.

Every one of these AND articles that we look at ends by looking at the sound and that rings true for this KRK Rokit 7 G4 and Yamaha HS8 battle we have been witness to today. These are designed with being used in a “professional” setting and not in my game or living room while I am pottering around doing something else. However, I have used these for many hours so I think I can give a good opinion on the sound capabilities of both of these speakers.

I have to say that I have spent a lot more time with the Yamaha HS8 speakers than I have these KRK Rokit 7 G4 speakers and I did use the HS8 first so that may be something that is swaying me a tad here. However, I can tell you that these speakers give you a very nice and balanced sound, and with the equalizer on the back and the app, you can have fun playing with the sound and I am sure if you are using these to make music, that is a huge plus. I listened to The Transformers: The Movie Soundtrack which is my favorite soundtrack of all time and it sounded great when played with these speakers. The one area where I will say it was lacking was the bass, but there is only a 6.5-inch woofer in here so that is what is causing the lack of real raw power these speakers provide. It is not “underpowered” or anything like that, but in comparison to other speakers, I have to say that these are far from being the most powerful speakers of this size I have ever used.

Overall, though, I do think that you get a very balanced sound with these and I am sure if you are using these to rock your own tracks, you will appreciate how real the sound is. Plus, for a smaller room or music studio, the lack of power I was just complaining about is probably not a big issue at all. Have a quick look at this KRK ROKIT 7 G4 Studio Monitor Review video if you want to hear these things in action.  A movie that my wife likes, but I do not but does have a decent soundtrack is 10 Things I Hate About You which we listened to while playing around with these. “It sounds great” was what my wife said. I have to admit that it did sound great, I think for mid-level kind of listening, not too loud and not too quiet, these really do hit that sweet spot.

In using the Yamaha HS8 speakers and the KRK Rokit 7 G4 speakers back to back, I noticed a big difference in the sound department, specifically the bass. These do have an 8-inch woofer and while that may not sound like a big upgrade over what the 7 G4 are offering, you can certainly hear and feel it. Even though these are not massive speakers, I think if you are listening to something like Contraband by Velvet Revolver, a rocking album that has some kick ass bass, it is going to fill the room. A smaller room is well and truly going to be rocking if you have these cranked all the way up. While I was playing around to see how powerful and how much bass these offered. I did have to try some other styles of music out with these too.

It was listening to Phenomenon by LL Cool J (I love my 80s and 90s hip-hop) and it was this album and its title track that really did make these speakers impress the hell out of me. The way these balance the sound is awesome and even as you start to turn the volume up, they do not suffer from any kind of distortion or anything like that. While I am about as far away from a musician or a music producer as you can get. I do think that the increased power you get from these will appeal to people who are making music.

I really like the sound that both of these speakers provide, but I have to say as much as I like the KRK Rokit 7 G4 speakers, when next to the Yamaha HS8 speakers, they just cannot match the bass and overall power that they provide. That alone means that they are taking this final round!