Confused about which among Vizio v21 or the Sonos Arc is better? We have written this comparison guide to help you decide.

A home theater’s secret weapon is a soundbar. With a relatively small investment, you may enhance the sound quality of your TV. This makes it more enjoyable to watch your favorite shows, watch a movie with special effects or play a game on your new PS5 or Xbox.

Soundbars are also easier to put up than larger home theater speakers, subwoofers, and AV receivers, contributing to their growing popularity. You’ll get higher audio quality with a soundbar than you will from your television, in general.

If you are in a hurry to know which one is better, we think Sonos Arc has a better edge over the Vizio V21.

The standalone Sonos Arc soundbar outclasses the Vizio V Series V21x-J8. Like the Vizio, the Sonos has a 5.0.2 configuration, but it’s built better and supports Dolby Atmos content. In addition, it boasts a room-correction feature and an improved soundstage, center, and surrounds performance. Some listeners may prefer Vizio’s bass-heavy sound to its more neutral default sound setting.

On the other hand, the Vizio V21 boasts a good array of sound-enhancing options. ‘Bass and treble settings, as well as EQ preset such as “Music,” “Movie,” “Game,” and “Dialogue,” let you fine-tune the sound. You can activate night mode by pressing the TVOL button on a remote when watching TV at night. However, it lacks features like a graphic equalizer and room correction.

To have a better look at the two soundbars, we have made a comparison based on built and design, sound, connectivity, and other features.

The Build and Design 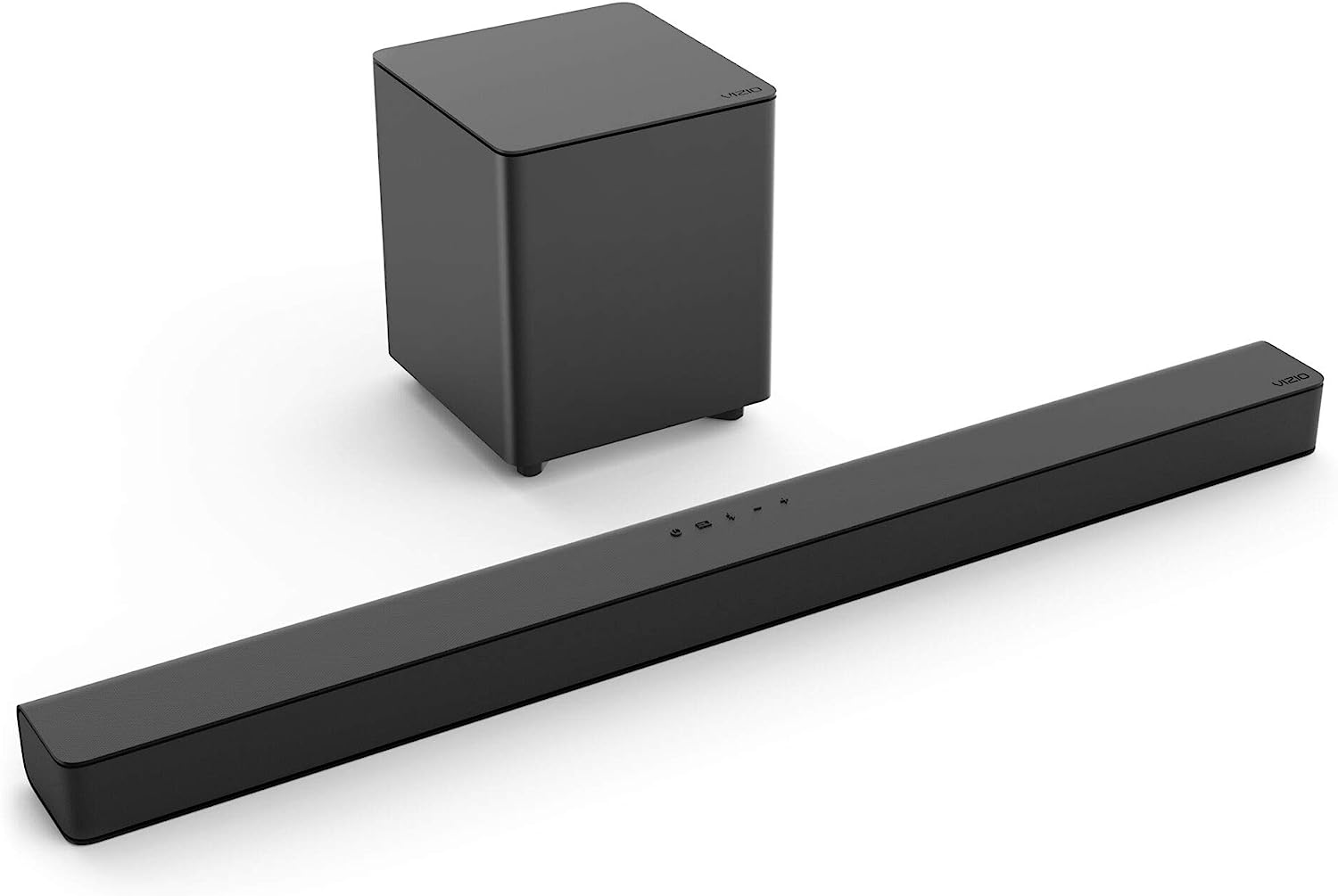 Simple lines and a glossy finish characterize the look of this soundbar. The front and sides are cloth-covered, and the body is largely plastic. Rubber feet secure it to the ground. Overall, it resembles the Vizio V Series V21-H8 in terms of design.

The subwoofer’s width and height are about the same as a typical desktop PC. To use it, plug it into an outlet to establish a wireless connection with the bar.

There are two holes on the back of the bar for the power cable and the inputs. A wall-mounting kit, which is supplied, can be attached to the bar’s bottom using the included universal holes.

The Vizio V Series 2.1 Sound Bar is solid enough in terms of build quality. A large portion of the bar is made of plastic, which lends it a sturdy feel. There is no doubt that the subwoofer’s melamine construction is strong enough.

As compared to the Sonos Beam, this soundbar extends further. It has a plastic-like texture, but it still has a high-quality feel. On each side of the bar, there are two plastic grilles and a black plastic mesh between them. If you’d prefer, you can also have this soundbar in white.

Even though you may purchase additional speakers from Sonos, this arrangement does not include any satellites.

The back of this soundbar is quite standard. There’s a small space for your power and inputs to be plugged in. Make sure you buy the wall-mounting brackets separately, as they are not included in the box because the mounting holes are exclusive to Sonos.

The Sonos Arc is built to a high standard. Solid and durable, the bar is composed primarily of plastic. Additionally, the front and sides of the bar are protected by a plastic grille. Overall, it’s a tad heavy, but it’s also quite well-built.

The Vizio V21 and Sonos Arc are made of plastic, but the latter is well-built and more durable. Vizio V21 appears to be susceptible to ripping or collecting dust, which is unfortunate.

The stereo frequency response of the Vizio V Series 2.1 is satisfactory. A bass-heavy sound profile in the preset called ‘Music’ gives your audio an extra kick and boom. However, the midrange is well-balanced, resulting in a lot of depth and clarity in the voices and lead instruments. You may modify the bass, treble, and EQ presets to create a unique sound.

To use the Trueplay room adjustment feature, you must have a compatible iOS device. Trueplay automatically adapts to your room’s specific acoustic properties to ensure the best possible sound quality. However, it isn’t currently supported on Android. There’s a lot of emphasis on the upper end of the spectrum when this function is used.

Lead instruments and vocals are easily audible. It’s difficult for the bar to replicate low-bass, though. The bass is more pronounced and more defined with the most recent firmware upgrade. We also didn’t observe a drop in the bass range throughout our subjective assessments.

There are several physical inputs on the Vizio V Series 2.1. An AUX connector allows you to connect older audio devices to the bar and a USB port allows you to play music from a thumb drive.

Vizio’s V Series 2.1 Sound Bar supports a wide variety of audio formats thanks to the ARC connector. Streaming services and Blu-ray discs use Dolby Digital, the most prevalent surround sound format. As a result, it doesn’t support lossless or object-based formats like Dolby Atmos or DTS:X, which is a pity.

The Vizio V Series 2.1 Sound Bar is compatible with Dolby Digital and DTS content via the optical input. Blu-ray discs and streaming services are the most prevalent places to find these formats.

The latency performance of the Vizio V Series 2.1 Sound Bar is impressive. Both ARC and Optical latency is relatively low, so the audio is generally in sync with the video. The effect is that you can use these connections to watch video content. However, your experience may differ depending on the app or TV you’re using and how it handles latency compensation.

It has a limited amount of inputs on the Sonos Arc. It features an HDMI ARC port and an optical port, but you’ll have to use the HDMI adaptor that comes with it. One can use the Ethernet port to connect the bar to your home network.

The HDMI ARC port on this soundbar supports various audio formats. The bar can play lossless Dolby TrueHD thanks to its eARC compatibility and virtually every Dolby signal.

DTS and Dolby Digital, available on most streaming services and select Blu-ray discs, may be played back on the soundbar via optical.

The Sonos Arc’s latency is excellent. The ARC and Optical In connections allow it to have exceptionally low latency. Using this method assures that your audio and video are in sync. As a result, real-world experiences may differ depending on the applications and TVs you use.

Vizio V21 has the edge over Sonos Arc when it comes to inputs. But both have impressive latency, ensuring that both your video and audio are in sync.

A series of light indicators are on the left side of the Vizio V21. Colors and patterns change according to what input you choose. You’ll hear a sound when you switch between the four EQ preset modes.

To turn the bar on or off, enable Bluetooth pairing, adjust the volume, and change the input use the buttons on the bar’s top.

The remote control for the Vizio V21 is simple and gives you access to all of the bar’s features. One can activate the auto-volume mode and volume controls for bass and treble.

The AUX-In connector on the Vizio V21 allows you to connect a voice Assistant-enabled device to the bar and use your voice to operate it. Although it is possible to use a third-party voice assistant, we don’t classify this as built-in capability.

This soundbar has a simple user interface. When a command is given, the primary light changes color and blinks. One of them lights up when the soundbar’s microphone is active, but that’s all there is to it.

With the touch-sensitive controls on this soundbar, you can play/pause, adjust the volume, and silence the microphone simultaneously.

Amazon Alexa and Google Assistant are both pre-installed in this bar. If you don’t want the speaker to hear you all the time, you can use the mic mute button to silence it. If you prefer to use a third-party voice assistant with your soundbar, you can do so.

You can control all of your Sonos devices with the S2 app. Like the Sonos Beam Controller app before it, it’s an improved version of the Sonos Controller app. Music services can be linked directly to the app and access other functions like setting alarms. Room setups for all of your Sonos devices may also be set up with this app. The Trueplay feature is only accessible on iOS devices.

Having the Alexa and Google Assistant pre-installed in Sonos Arc makes us believe that it is one of the innovative soundbars today. Thus, it is preferred by the new generation.

After comparing the two superb soundbars, we have come up with an answer to which is better. Both Sonos Arc and Vizio V21 have an impressive sound, build, and design features. But Sonos Arc has edged Vizio V21 in several ways.

Vizio’s is not a bad option also. If you prefer a low-profile soundbar, you can opt for Vizio V21. Let us hear your opinion—comment below your views and your experiences with these products.