I knew that I was going to have to put this Sonos Arc and the Sony HT-A5000 together sooner than later as I already put the Sonos Arc up against the Sony HT-A7000. Putting it up against the Sony HT-A5000 actually feels a bit more appropriate as they are more similar. I think if you are trying to come up with a shortlist of Dolby Atmos soundbars to add to your home, both of these have to be in consideration. Enough of the promo! Let’s take a closer look and see which one of these is the best.

These two soundbars are actually quite close in price which is why looking at the price is the perfect place to start this Sonos Arv and Sony HT-A5000 battle. These are still relatively expensive, but they both offer you excellent value for money so do not think of either of these as overpriced. 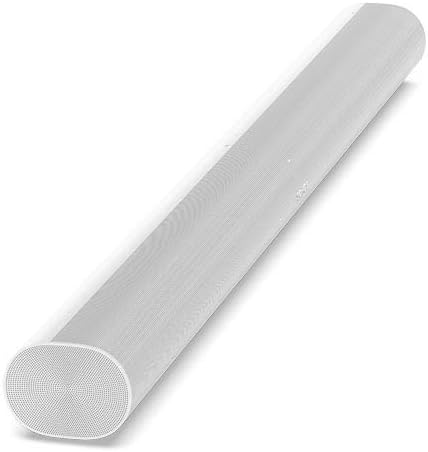 The way that the price of the Sonos Arc has been moving all over the place lately has been kind of crazy. Since the day it was released the Sonos Arc managed to keep its $799.99 asking price very well. However, it has spiked more than a few times, I saw it go over the one thousand bucks mark on Amazon a few weeks back and as of me writing this, it is currently sitting at $839 which is still not a bad price at all. I would suggest being patient with this one as it very rarely goes below that 800 bucks RRP, but you do not want to overpay some 3rd party seller on Amazon.

As of me writing this the Sony HT-A5000 currently is listed on Amazon for $998. I decided to have a look around and Walmart seems to be a big seller of Sony soundbars and on there it is also listed at $998. I did have a look on eBay and you can find a few of these on there (well as of writing) however, you are not going to be saving any significant amount of money, plus you may have to deal with the headache of dealing with an eBay seller.

There is not a massive difference between the Sonos Arc and the Sony HT-A5000 in terms of the asking price. I know 100 bucks is still a fair chunk of change, but even if the Sonos Arc was the same price as the Sony, I would actually say that the Sonos Arc is probably the better value for money in my own humble opinion.

Now, this is what I am talking about looking at the design of these soundbars is something I was very excited about as soon as I started this comparison. These are two very awesome looking soundbars and I am a huge fan of both companies so this should be a very interesting round.

The Sonos Arc is available in both black and white and it is the white version I have had the pleasure to look at. I suggest you take a look at this Unboxing a Sonos Arc !!!!!!!! WOW! if you want to see it in all its glory. I have to say that the Sonos Arc is the best looking of all the soundbars that Sonos has made over the last few years. This is actually a pretty big soundbar as it comes in at 45” x 3.4” x 4.5”. It has a really cool and modern style to it and whereas most other soundbars go for a more angular design, the Arc is much curvier and it is a design that I think really is pretty awesome. Instead of using a fabric grill like they did with a few of their other soundbars, Sonos has used plastic for the grill and it looks much better as a result. I do not see anyone having any complaints about having this out on display in their home or their home theatre.

As this is a Dolby Atmos soundbar, Sonos has figured that most people will be using HDMI to connect this to their TV. That is why there is just a single HDMI port on the back of here (and the power port of course) however, if for some reason you do want or need to connect this to your TV via an optical cable, Sonos has your back. This actually comes with a pretty neat HDMI to optical cable it is pretty awesome they threw this in and do not make you pay for it separately. There is no remote control with the Sonos Arc! You have to download and use the app or use Alexa. Look, I think not having a remote control flat out sucks, but the app is actually easy to use.

I have to say that when it comes to the best looking soundbars for my personal taste it is really close between Sony and Bose as to who makes the best looking soundbars. The Sony HT-A5000 is a fantastic looking soundbar and I actually like the design here even more than I do the A7000. The dimensions are very similar to the Sonos Arc as this comes in at 47.6” x 2.8” x 5.5” so it still needs a fair bit of space. This thing just looks so cool! Sony uses a metal grill on the front of the soundbar and a metal grill I always feel gives a soundbar that more premium kind of look to it. On the top, it is mainly plastic, but where the up firing speakers are, Sony has used metal grills, this is awesome and way better than the weird fabric the A7000 uses. It is just a real showcase soundbar and something I would display with real pride in my home.

On the back of the soundbar, you have an HDMI Arc a full HDMI in, an optical port, and also a USB port as well. Of course, you will need to use HDMI if you want to take advantage of the Dolby Atmos capabilities of the soundbar. Sony has managed to keep things nice and clean around the back of the soundbar. The remote control that comes with the Sony HT-A5000 is the same as the one that comes with the Sony HT-A7000 and I am more than ok with that, to be honest with you. This is an awesome remote that gives you full control over the soundbar and it has some fun presets you can select as well.

The Sonos Arc is a soundbar that I really do like and I have liked the design of it more each time I see it. However, this is an easy win for the Sony HT-A5000 for me. I much prefer the overall style of the Sony; it just offers what I want more from an aesthetic point of view. However, I could see why someone would like the curvier style of the Arc more.

We come to the final round and the main event of this two speakers cage match. These are two great sounding soundbars and they do have a rather similar kind of sound, but in my time with them, I have to be honest and say that there was one that I preferred over the other.

For under a grand I am not sure there is a better Dolby Atmos soundbar on the market right now. Thor: Ragnarok is one of my favorite movies from the Marvel Cinematic Universe and I only had the DVD for the longest time, well I just picked up the 4K and holy crap does the Dolby Atmos track make a huge difference. The Dolby Atmos capabilities of the Sonos Arc really are spectacular. The power and way it throws up the sound so that it feels like you are surrounded by it is something that even after all this time impresses me. Even though Sonos has their awesome, but pricey Sonos Sub Gen 3 that they like to tempt people who have an Arc with. I think that the Arc on its own actually has a fair bit of kick and bass going for it. I actually watched the original X-Men with the Arc and was very impressed with the bass that it provided.

I think that the most impressive thing about the Sonos Arc is not just that it is great in the Dolby Atmos department. It has such a phenomenal balanced sound that I really do not think there is anything that this would not excel at. A real favorite of mine is The Big Lebowski and what I liked about watching it with the Arc was how the dialogue was crystal clear, but all of the sound effects, music, and so on were perfectly balanced. Sometimes TV speakers really struggle with balancing the sound, that is not the case here at all. I know it sounds cheesy, but the Sonos Arc really can give you movie theatre like sound in the comfort of your own home.

The Sony HT-A5000 is a very impressive soundbar. I do not think that anyone who decides to purchase this is going to be disappointed and for the most part, the reception to this has been overwhelmingly positive. I highly recommend you watch this Sony HT-A5000 Review – An Absolute Unit With A Ton Of Bass video if you want more information about the sound capabilities of the HT-A5000. The Dolby Atmos capabilities of the Sony HT-A5000 are pretty damn solid. I watched Spider-Man: Into The Spider-Verse which is a movie I know very well. It sounded great here, but I have to say that when it comes to Dolby Atmos, I do feel that it is not quite at the level of the Sonos Arc. I am not saying it is bad at all, it is far from it. However, we are looking at these in a comparison and I noticed a difference between the two.

One area where I feel that the Sony HT-A5000 really does excel is in its bass. It has a built in subwoofer and while I would always go for a dedicated subwoofer. I was very impressed with the amount of bass that this helped add. The more I think about it the more I am impressed with the overall power that the HT-A5000 has. The stadium scene in The Dark Knight Rises in particular really blew me away, I ended up rewinding the movie and cranking the sound up! The overall sound performance of the Sony HT-A500 is great, I watched Cast Away and was impressed with how balanced the overall sound was. From vocal clarity, music, and ambient sound, it handled it all with a lot of class and style.

If you take away the Dolby Atmos capabilities, I actually think this is a pretty close matchup. I was very impressed with the bass and overall performance of the Sony HT-A5000, but I am all about Dolby Atmos these days and that is the future of watching movies at home. Plus, I do have to say I think that the Arc does also have a bit better performance when it comes to the overall balance of the sound so that is why I am giving this round to the Sonos Arc.

I had an awesome time with this Sonos Arc and Sony HT-A5000 article. I have to say that the Sony HT-A5000 came way closer to taking down the Sonos Arc than I thought it would. I really like the style of it and I think I would have to rank it in my top three best looking soundbars of all time if I am being honest with you guys. However, I just feel that the sound capabilities of the Sonos Arc are better. The Sony is not bad at all and I sure as hell would not be against having it in my house. However, in using them back to back, the Sonos Arc I feel is the better soundbar.