Now this Sony HT-A5000 and the Bose 900 battle is a WrestleMania main event worthy kind of matchup. These are two awesome soundbars and while the Bose Smart Soundbar 900 is the latest and greatest soundbar from Bose. I think that it is going to be very interesting to see how well the Sony HT-A5000 stands up against it. I loved the Bose Smart Soundbar 700 was the greatest soundbar around for quite a while, but I was very excited to see how Bose would follow that up and the 900 was what they came up with.

You probably are coming into the price category of this two speakers comparison article thinking that the Bose is going to cost considerably more than what Sony is asking. However, I can tell you right now that this round is not going to go the way that you think and you will probably be surprised!

The current asking price for the Sony HT-A5000 is $998. This is priced the same on Amazon as it is at Walmart. This actually surprised me as Walmart usually has a few bucks at least shaved off their various Sony products. Anyway, I do not think that the asking price here is too out of line at all. I did of course have a look on eBay, but I found the prices on there to be more often than not more than what you would be paying somewhere like Amazon or Walmart. 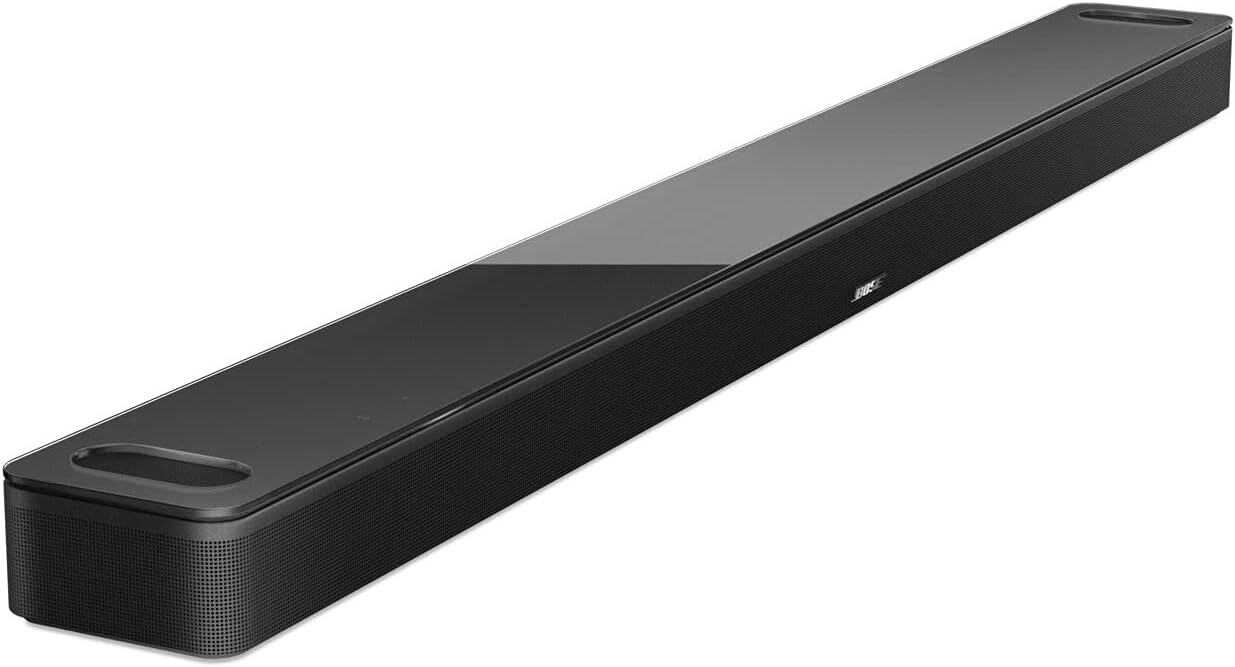 How Bose is able to offer the Bose Smart Soundbar 900 for under a grand really does blow me away. I thought for sure when this was announced it would cost $300 to $400 more than the Bose Smart Soundbar 700, but that is not the case at all. This has an RRP of $899.99 which is just mind blowing to me! This is a Dolby Atmos soundbar and a pretty damn new one (well as I write this) and they are asking under a grand for it? I have tested soundbars that cost several hundred dollars more than this that are nowhere near as good!

The Bose Smart Soundbar 900 has to be the winner here. Bose could have asked for an even grand here and I would have still picked them as the winner. I know that these are two expensive products, but they are also very premium products and I do not think what either company is asking is bad at all.

Out of the three categories we are looking at in this Sony HT-A5000 and Bose 900 contents, design is going to be the closest. These are two awesome looking soundbars and they both have a style that I am a massive fan of. It is going to be really tough I think for me to pick a winner between these two!

I suggest that you have a look at this Sony | HT-A5000 5.1.2ch Dolby Atmos® Soundbar Product Overview which Sony has made themselves as it really does show off just how cool this soundbar looks. This truly is a spectacular looking soundbar. It is also a pretty good size too as the dimensions are 47.6” x 2.8” x 5.5”. the first thing I have to talk about is the grill on the front of the soundbar. This is a metal grill and if I had to pick between fabric, plastic, and metal, metal would be my choice every time. It truly does give this soundbar a very premium look to it. On the top of the soundbar, Sony has borrowed a style from the Bose Smart Soundbar 700 as they do not just have plastic on here. They have these metal grills on the up firing speakers which I think gives the top of the soundbar a ton more personality to it. I do not see anyone being disappointed with this sitting out in their living room or home theatre.

As far as the back of the soundbar goes, the Sony HT-A5000 has all the inputs you need. HDMI Arc, HDMI In, Optical, and USB ports are located on the back of here. Sony has done a really solid job of keeping things nice and stylish round the back of the soundbar, even though you will hardly ever actually see it. One area that Sony really does excel in is with their remote controls. Sony does also use this remote with their Sony HT-A7000 and the reason for that is that it is pretty much perfect. It gives you all the control you need over the soundbar and it also has a very premium look and feel to it as well.

For a very long time the Bose Smart Soundbar 700 was the pinnacle for me when it came to soundbar design. The Bose Smart Soundbar 900 is not quite as long as the Sony offering as this comes in at, 41,14” W x 2,29” H x 4,21”. Like the Sony, The 900 has a very cool metal grill on the front to protect the speakers, what makes this extra special is this also goes around the sides of the soundbar too, it truly does look awesome and spectacular. It just has this high-tech vibe about it and this also extends to the top of the soundbar too. The 700 has a glass top and I love it! The 900 also has that glass top, but there are also metal grills where the up-firing speakers are located! It is such a cool design and yet that glass can be a pain in the butt to look after, but I would happily give it a wipe down once or twice a week as that is a very minimal thing you have to do. If you do not keep on top of it, dust and fingerprints will really take over the top!

Around the back of the Bose Smart Soundbar 900, we have an HDMI Arc along with an HDMI in port as well. There is also an optical port and they do have their little port that is there to tempt you into getting their awesome, Bose Bass Module 700. The only area that I think the 900 is lacking is the remote control. The Bose Smart Soundbar 700 has one of the most awesome remote controls I have ever used and they should have just reused that here. Instead, they cut back and while the remote is certainly fine, it is nowhere near as good as the one that came with the previous model.

When it comes to soundbars, I would have to say that Bose and Sony are the best when it comes to soundbar design. They just continuously knock it out of the park with their designs and these are two amazing soundbars. While I love and I mean love the Sony HT-A5000, I do have to say that the Bose Smart Soundbar 900 is taking this round. That glass top and the metal grill on the side just put it over the top.

With this comparison contest coming into the final round, we are looking at the sound. These are both offering you Dolby Atmos and I am all about Dolby Atmos these days, it truly is a game changer and these are two soundbars that offer great Dolby Atmos!

We will start by looking at how good the Sony HT-A5000 sounds. I think that Sony makes great sounding soundbars and I would certainly put the HT-A5000 near the top of the list when it comes to great soundbars that are under a grand. This thing is great, but I have to say as I am something of a Dolby Atmos connoisseur these days, I do think that the Dolby Atmos here, while good is not at the level of the 900. I ended up watching the new Matrix movie, Matrix: Resurrections with this, and thought it did a great job in bringing the movie theatre sound experience into my home. I am trying my best not to dump on the Dolby Atmos performance here as it is great, but when you go from this to the 900 and then back to this, you do notice a pretty big difference.

As far as the overall balanced sound performance goes, the Sony HT-A5000 really is something that will make you say wow. I would imagine if this was your first high-end soundbar, you will be blown away by the sound capabilities of this soundbar. Take a movie like Avengers which has a lot of loud action, but it also has a lot of intense dialogue scenes as well. With the HT-A5000, you never miss a word, even when there are explosions, Hulk screaming or whatever going on. The vocal clarity here truly is great and if you are someone that hates the way modern TVs handle dialogue (they are getting better to be fair) the upgrade here is truly phenomenal.

I do not think I have ever been as excited to check out a soundbar as I was the Bose Smart Soundbar 900. A video I saw that I really liked was this, Bose 900 Dolby Atmos Soundbar Review video. I have played around with so many Dolby Atmos capable soundbars over the last 18 months or so it would make your head spin! I have to say that the Bose Smart Soundbar 900 might be close to the top of my best sounding Dolby Atmos soundbars list. This thing is truly amazing and the wife and I actually watched the live action remake of Beauty & The Beast (a movie I am not huge into) and we were both amazed by how good it sounded. It truly is movie theatre quality sound you are getting with this. It fills the room and those up firing speakers really do add a whole new dimension to your movies.

As far as the overall balanced sound goes, few can match what Bose has done here, especially with keeping the RRP at under a thousand bucks. One of the best animated movies I have seen in the last year or so is Ron’s Gone Wrong. This soundbar made me love the movie even more! From the vocal clarity, the bass, the general loudness, and the way that it balances sound it is something that just knocked my socks off. Another movie we watched with the Bose Smart Soundbar was A Simple Favor which is a smart, stylish, and fun thriller, and being able to hear all the dialogue in such a crystal clear way truly does add a lot to the movie. I really cannot overstate just how good the Bose Smart Soundbar 900 is, there was not one aspect of the sound this produced that disappointed with me. Even messing with the different sound presets is fun and makes you hear things differently.

This feels like a real harsh category, today man. Look the Bose Smart Soundbar 900 steamrolls the Sony HT-A5000 and picks up a first round knockout. The thing is, the Sony HT-A5000 is a damn fine sounding soundbar, but next to the Bose Smart Soundbar 900 just trumps it in every way that you could imagine. While the HT-A5000 is great, it just cannot stand head-to-head with the 900.

I will admit that when I started putting this Sony HT-A5000 and the Bose 900 article, I knew right away that the Bose Smart Soundbar 900 was going to be winning this thing. However, the way that it just dominated every category we have looked at today (well maybe not quite the design category) was kind of shocking. I have said multiple times in this article that the Sony HT-A5000 is a great soundbar. However, it went up against an Iron Mike Tyson style opponent that just smashed it! As of me writing this article, the Bose Smart Soundbar 900 is my favorite soundbar on the market right now and it would probably come out on top against anything that steps into the ring against it.