Soundbars are generally known as audio device which helps us amplify sound from a sound-producing source. The TV speakers are not enough to produce the quality of sound to suit our needs at a particular time, but on this note, soundbars are made to replace the less quality sound produced by the TV with a clean and clear sound.

The most beautiful and interesting thing is to sit down in the corner of your room, listening to good and quality sounds from your amplifying appliances.

Today’s comparison will be between two speakers: the JBL 5.1 SOUNDBAR and the KLIPSCH CINEMA 400. These two speakers may perplex purchasers because the two brands’ companies are award-winning and produce some of the best-selling speakers on the market.

During our research, we’ll look at both devices, compare them, and determine which speaker produces greater sound quality. There are a few factors to consider when purchasing a speaker, as our comparison will cover price, design, specifications, speaker performance, and our conclusion.

Before one would need to purchase a particular soundbar, the monetary value of the product needs to be taken into consideration because there are different soundbars with different prices. But an estimate is needed to be done to determine the kind of speaker you can afford with the money. So in this section, we are going to be looking at the price of the two speakers in consideration and we would be able to deduce the one to be recommended for purchase. Sometimes the price of a soundbar does not guarantee the quality of sound that will be produced.

Due to the economic research done on these two soundbars, we can realize that the price of the JBL 5.1 soundbar is on the high side. The price is about $170 higher than the opponent speaker. Economically, instead of using the whole $500 to purchase the JBL 5.1, you can buy the opponent soundbar and even save the remaining bucks or use the remaining bucks to purchase another set of a speaker which will, in turn, improve the sound quality of sound produced.

For a product to be rendered marketable, the design has to be one of the best. The design is one of the most important features to be considered while choosing the kind of soundbar to be used for our spaces. Considering the different kinds of soundbars we have in the market today, it is being noticed that design ranges with the kind and model of the soundbar. 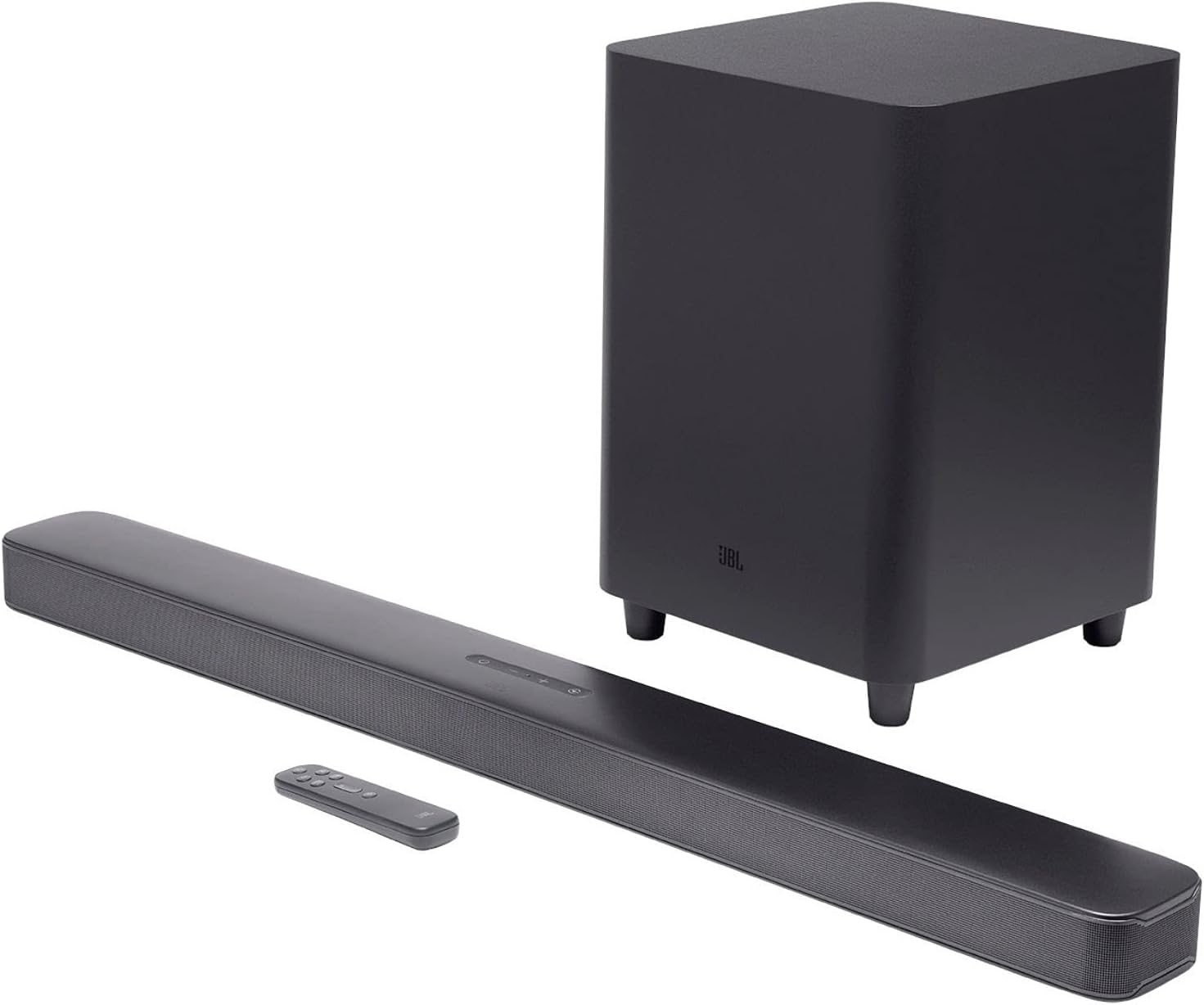 Talking about the subwoofer, it is mounted on four plastic pegs beneath the speaker. This subwoofer is composed of black melamine, which gives it a sleek appearance. 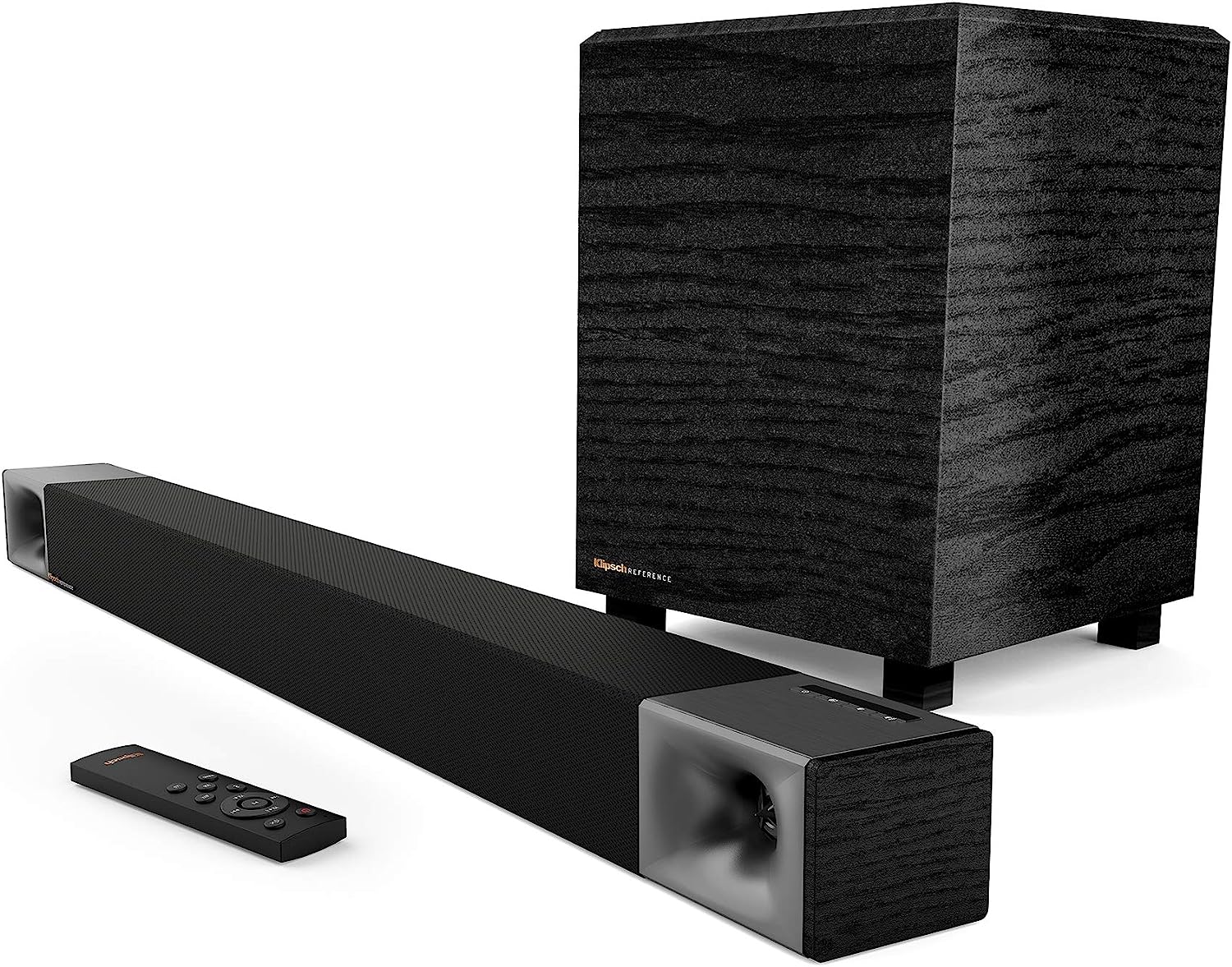 The bar is primarily made of plastic and is covered in fabric. Plastic horns may be found at each end of the bar and the soundbar and the subwoofer are coated with black color. The subwoofer is supported by four wooden legs that keep it off the floor. The majority of it is built of solid wood. The driver and the port are both placed beneath the surface.

The inputs and power connection are accessible through a hole on the rear of the bar. There are also holes for mounting the bar on the wall that are proprietary. When you buy the bar, it comes with mounting brackets and screws, which is convenient.

The bar of the JBL 5.1 tends to be more protected compared to the Klipsch Cinema 500 soundbar. After long use of the Klipsch soundbar, the fabric material begins to tear and thereby expose the drivers.

Talking about the color, the JBL is also given a credit for the color of the soundbar, most soundbars are always coated with black color but the JBL is coated with a matte-black finish which makes it finer than the opponent.

The bodily features are the specifications of a soundbar. These are the features exhibited by the soundbar which brings out the better sound and the features for connectivity of the speaker.

Wireless playback is available at this bar. This soundbar is compatible with all common wireless playback options, so you may wirelessly stream your favorite tunes or albums to the bar as it supports Bluetooth, Wifi, Chromecast, and Apple Airplay. It has a remote for navigating through the sound.

The JBL Bar 5.1’s Full HDMI In port supports a wide range of audio formats. It is capable of playing Dolby Digital content, which is prevalent on Blu-ray discs. To play Dolby Digital Plus video, however, this bar must encode and downmix it to DD 2.0.

There are a few input possibilities for the Klipsch Cinema 400. There’s a 3.5mm AUX port, so you can connect your phone to the bar and listen to music. There’s also an Optical In port, as well as a shared HDMI ARC and HDMI Out port. However, because there isn’t a Full HDMI In connector, you won’t be able to utilize the bar as a hub for many devices.

The Klipsch Cinema 400 only supports wireless playing over a Bluetooth connection, this means you can use Bluetooth to stream audio from your phone or tablet. You won’t be able to playback audio wirelessly using Wi-Fi, Apple AirPlay, or Chromecast connections, though. It also has a remote for navigating through the sound.

In comparison to the Klipsch Cinema 400, the JBL Bar 5.1 Surround is a little better for mixed-use. The JBL is a better-built 5.1 system that performs better in the center and surrounds. It even has a Full HDMI In port, unlike the Klipsch. The 2.1 Klipsch, on the other hand, can replicate a lower-bass range that is more expanded.

However, in this section we shall be considering these two soundbars in terms of the sound they both produce.

The sound enhancement options on the JBL Bar 5.1 are adequate. Only two EQ presets are available: ‘Smart Mode,’ which enhances sound effects, and ‘Standard,’ which disables Smart Mode. There’s also a night mode and room correction. While there is no dialogue enhancing tool, the maker suggests utilizing the ‘Standard’ mode for vocal-centric content to eliminate sound effects. The entire system output is 550 watts and has a frequency range of 40Hz to 20kHz.

The soundbar has five racetrack-style drivers and two side-firing 1.25-inch tweeters to create five 50-watt channels behind the grille, while the 300-watt sub uses a 10-inch down-firing woofer and a bass vent on the back panel for effective air circulation.

The stereo frequency response of the Klipsch Cinema 400 is remarkable. It offers a highly neutral, harmonized sound profile when set to its default ‘Natural’ preset, which is suitable for listening to a wide range of audio content. It has a snappy mid and high-bass, but the deep rumbles from the low low-bass aren’t truly felt. Users can change the subwoofer volume to tailor the sound to their preferences. The subwoofer also has 35Hz frequency responsiveness.

It has been a serious rift between these soundbars as they are both worthy to be considered in the choice of selection. But since we are comparing the two soundbars, one must be taken as the best over the other one.