It used to be that if you wanted Dolby Atmos sound, you needed to have an elaborate home theater setup that typically required pricey Atmos hardware. Increasingly, many soundbar manufacturers are more or less managing to incorporate in an affordable soundbar. Make no mistake, some of the Dolby Atmos soundbars are usually priced on the higher end. However, one company that is increasingly churning out lots of value-packed and feature-rich Dolby Atmos soundbars lately is Vizio. And we mean, real Dolby Atmos with dedicated up-firing speakers without faking it with sound processing software.

Two of its best Dolby Atmos are the Vizio SB36514-G6 and the Vizio  M512a-H6. We will simply call the former the Vizio 36” and the latter Vizio M512. Both of these are smaller but impressive soundbars that undoubtedly deserve a look if you are shopping for an affordable or mid-priced home entertainment system. The Vizio 36” has been around for quite some time having been launched in 2019 and now costs just over $479 and you can even get it for much cheaper than this if you shop for sales or promotional offers. The Vizio M Series 5.1.2 is a more recent launch, having arrived last year, and costs about $500. Pricewise, both of these Dolby Atmos soundbars cost more or less the same.

Let’s look at what each of these offers you and help you determine which will be worth your investment.

The Vizio 36 ships in a compact L-shaped box that looks like one of those 2-channel or 3-channel budget soundbars. You will notice that the size is relatively smaller. If you are used to seeing heftier bars such as the Samsung Q950A, you will be amazed at just how compact this soundbar is.

It might be cheaply priced but it doesn’t necessarily look cheap. The bar features Vizio’s signature silver and black design. The design looks both sleek and slim.

Its dual satellite speakers each contain two drivers, complete with their up-firing drivers, which together with similar drivers in the soundbar will bounce the audio on the ceiling for that hemispheric immersion quality in the sound. Finally, there is its aluminum-plated subwoofer with has one powerful 6-inch driver for the punchy bass.

Aesthetically, it isn’t very sleek and sexy. It is more on the utilitarian side although its silver-plated subwoofer adds some flair to the overall look. 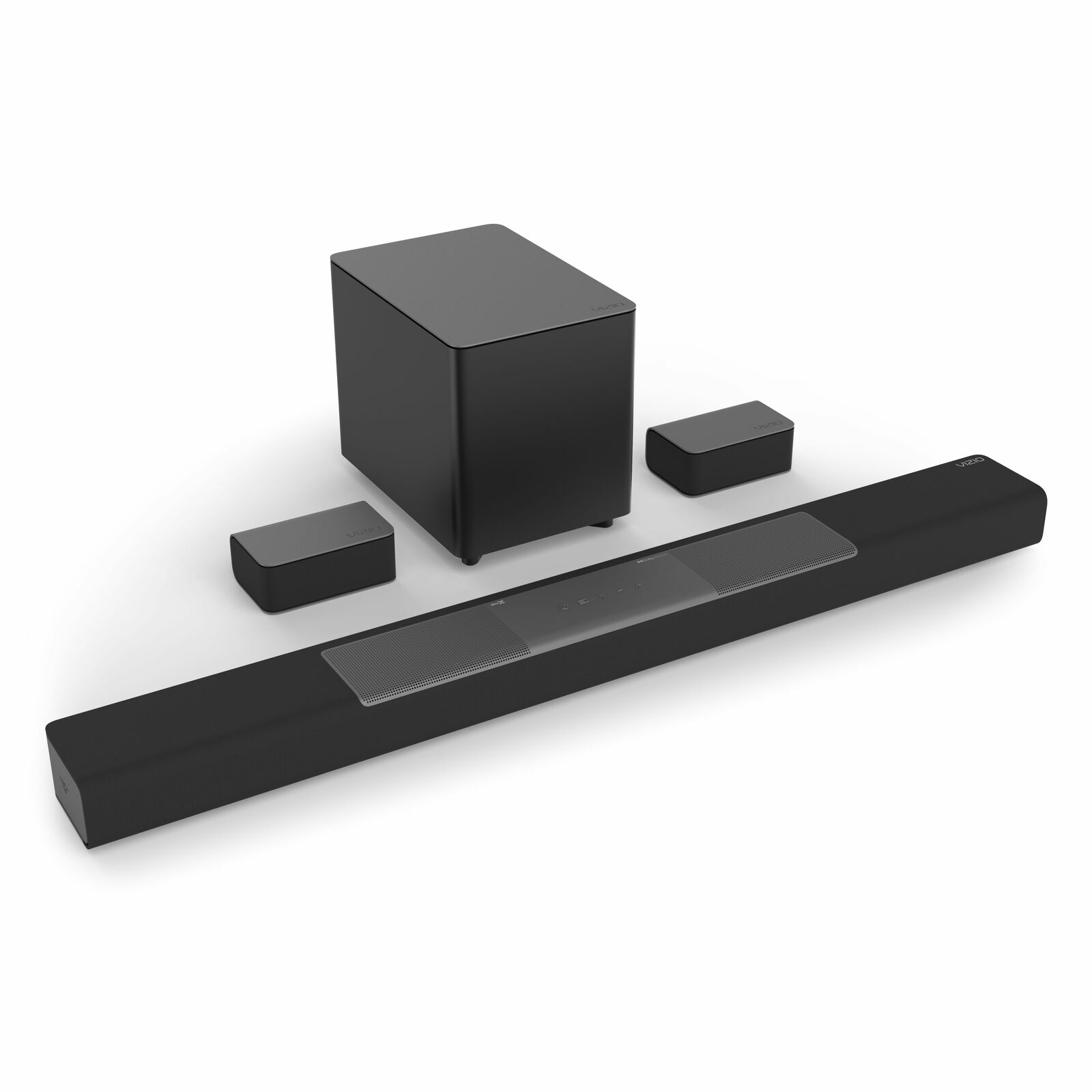 The Vizio M-Series 5.1.2 Dolby Atmos soundbar is a more recent arrival than the Vizio 36” having been launched only last year. Like the above soundbar, it features a proper Dolby Atmos with up-firing speakers rather than a Dolby Atmos surround audio that is faked with digital processing software for an authentic dome of sound effect that many of us now want in our audio experiences.

This is one of the cheapest “true” Dolby Atmos soundbars and, like the Vizio 36”, features dedicated height speakers. You will also notice that it looks quite sleek and high-end and is sure to add some flair to your living rooms. On the looks and style department, it compares favorably with the stylishly designed Vizio Elevate.

At 40 inches, it is slightly wider than the Vizio 36”. The setup includes the main soundbars, a 6-inch subwoofer that wirelessly connects to the soundbar as well as two rear wired speakers that connect to the subwoofer via speaker wires.

However, the design of the Vizio M Series 5.1.2 features some important additions over the Vizio SB36514-G6 like the up-to-date HDMI eARC connectivity along with the DTS:X format which is lacking in the Vizio 36”.

The Vizio M512 is also taller than the Vizio 36”. It has a height of  2.68 inches and a depth of 4 inches. Behind the main grille of the soundbar are three sets of fabric tweeters and mid-drivers. The up-firing drivers sit behind a perforated plastic material. Although the up-firing drivers are closer to the center, they still bounce off powerful Atmos effects to the ceiling.

The Vizio M512 offers you four different physical connectivity options including USB, HDMI in/out, optical connections as well as two 3.5mm analog jacks (input). You can use the 3.5mm jacks to connect to the Amazon Echo Dot and other smart speaker devices.

The M-Series’ wireless connectivity works only for Bluetooth. However, unlike the Vizio 36”, you can’t use this to wirelessly stream content over Wi-Fi to different phones via the Chromecast system, an important functionality that is, unfortunately, lacking in this later model.

The Vizio M Series 5.1.2 is no doubt sleeker and more stylishly designed than the Vizio 35”. The 40-inch M512 is also wider and taller and has the added advantage of DTS:X support and HDMR eARC. However, unlike the Vizio 36” it lacks Wi-SFi streaming capabilities. Overall, both of these are solid and “true” Dolby Atmos soundbars, priced about the same, and which provide a convincing surround sound with a good punch.

They both provide a decent amount of collection points although the Vizio 36” lacks the latest HDMI eARC that is present in the newer Vizio M512. The M512 also has a more stylishly designed grille made of high-quality fabric.

The Vizio SB36514-G6 soundbar features a series of LED dots. This is done away with in the M512 which has a more sensible display where every input has its unique color LED. The M512 is even more advanced in this area and can even verbally read out the actual input that you are currently on whenever you are effecting a change of inputs.

Although the M512 has very few controls on top of the soundbar, it makes up for these with a remote that has a proper wand and a simple one-line LCD.

You will notice that the older Vizio 36” has more up-firing speakers than the newer M512 but when it comes to delivering the much-coveted dome of sound Atmos effect, both of these soundbars deliver a top performance within this price range. The Dolby Atmos effect in these speakers is a real one. They also feature equally powerful subs and surround speakers and tons of other functionalities.

The M512 gives numerous sound adjustment options that some users might appreciate as it allows you to customize the sound to your heart’s content. On the flipside, that comes at the price of the simplicity found in the older Vizio bar. The bass in both speakers is overpowering although not as good as that of the best premium-end soundbars.

If you are looking for Atmos thrills for cheap, these are some of the best and most affordable Dolby Atmos soundbars that you can buy. The four-channel Vizio 36” gives you a truly immersive Atmos sound within a slim and trim design, complete with Bluetooth and Wi-Fi support. The M512 extends its capabilities with a sleek and stylish design and the latest HDMI eARC and DTS:X support but is lacking in Wi-Fi support. The M512, with its two up-firing speakers, might not give you the dome of sound in the Vizio 36” but the difference is marginal. Not to forget that these budget Atmos soundbars, with their extensive features, will cost you just $500 or less.