Which is the best between the Yamaha YAS-408 (MusicCast Bar 400) and the Bose Smart Soundbar 700? It’s tough to compare Bose and Yamaha soundbars. Both brands are well-known worldwide, with millions of audiophiles following them.

The Yamaha YAS-408 and the Bose Smart Soundbar 700 both have several key differences and similarities, as seen in this comparison. Both are well-equipped with excellent abilities and have impressed users and critics from all around the world.

We examine the different possibilities given by both soundbars in our review, which will help to dispel the difficulty associated with deciding on the best soundbar ideal for your house.

The Bose 700, like previous models in the line, has QuietPort and PhaseGuide technology. It also comes with the company’s ADAPTiQ auto audio calibration and is housed in the same cabinet just like the previous 300.

Yamaha’s YAS-408 2.1 system is part of the company’s 2018 portfolio. The MusicCast Bar 400 is another name for it. It’s comparable to the Yamaha YAS-207, except it has MusicCast, which allows you to stream music in various rooms as long as your devices are compatible.

As far as soundbars are concerned, Yamaha has a lot of expertise, so there are high expectations when it debuts anything new in this category. Fortunately, the Yamaha YAS-408 – a soundbar with a primary unit and a wireless active subwoofer – generally meets those expectations. Support for the MusicCast multiroom system, Amazon Alexa voice control, Hi-Res Audio, DTS Virtual:X, and Apple AirPlay are all part of the several features included in this package. 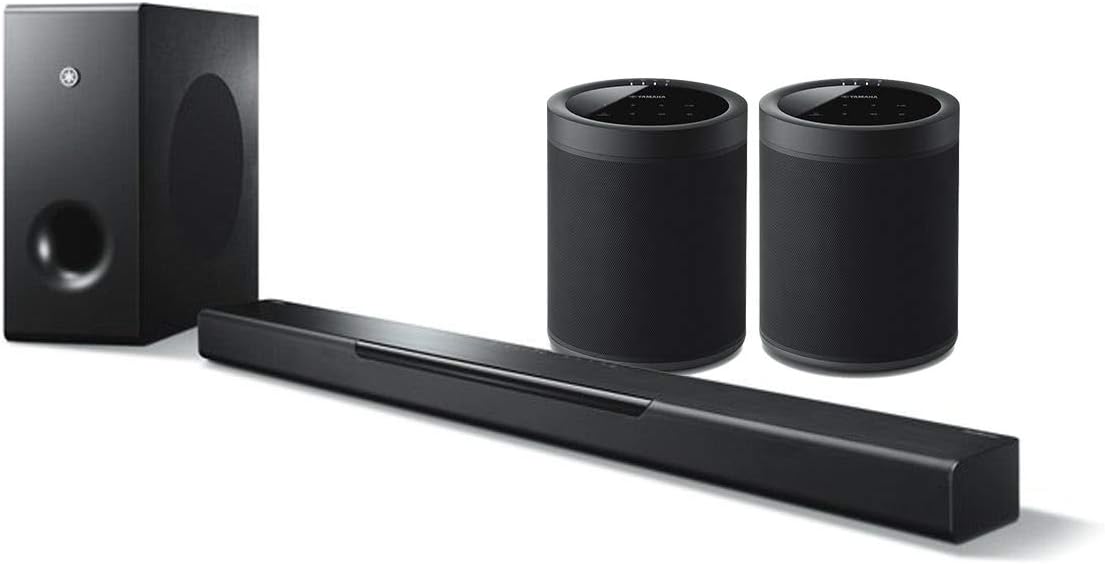 The build quality of the YAS-408 is excellent. Except for the front face of the bar, which is protected by a metal grill, it is mostly constructed with plastic. It has a sub made of wood, and the only flaw in the arrangement is the cloth covering the subwoofer speaker, which might become filthy or damaged.

The build quality of the Bose Soundbar 700 is outstanding. It features a one-of-a-kind design with a luxury feel, and the complete arrangement is extremely durable and stable. The soundbar is mostly constructed of plastic, with a metal grille wrapping around the front and sides. A glass plate covers the top, making it easy for dust and fingerprints to gather.

You may use the free remote app for iOS and Android to control the YAS-408 because it supports MusicCast. The user interface is well-designed and effective, making it excellent for setting up and operating the system. Since the soundbar doesn’t have its own display, this feature is very useful.

The connections for the YAS-408 are found in a recessed region on the soundbar’s underside. An HDMI input, HDMI output with ARC (Audio Return Channel), a 3.5mm auxiliary audio connector, an optical digital audio input, and an Ethernet port are all located here. Wi-Fi (2.4GHz/5GHz), Bluetooth (Ver. 4.2+EDR/A2DP, AVRCP), and Apple AirPlay are the options for wireless communications.

All of the physical connections for the Bose Soundbar 700 are housed in two recessed places on the underside, but there’s not enough room to actually plug in the numerous cables, which is a design flaw. Bose does, however, offer optical and HDMI connections in the package, which is commendable.

Given the pricing, the lack of HDMI inputs and only one output is disappointing. On the bright side, it supports eARC (enhanced audio return channel), allowing you to send lossless audio from your TV to your soundbar. That is, assuming your TV supports eARC.

The YAS-408 includes a number of valuable features, the most notable of which is MusicCast, an extremely efficient multiroom system that can be used to create a system of MusicCast-supporting devices present in your home. The remote app, similar to a Sonos system, allows you to control each of these devices and stream music to and from them.

Other outstanding features of the soundbar’s Hi-Fi include compatibility with WAV, MP3, AIFF, AAC, Apple Lossless, FLAC file formats, WMA, as well as Hi-Res Audio up to 24 bit/192kHz.

There are also built-in access to Tidal, Deezer, Spotify, and Qobuz, as well as other prominent music streaming platforms.

Formats like lossy Dolby Digital and DTS Digital Surround are compatible with BAR 400, but it doesn’t support lossless formats such as Dolby TrueHD and DTS-HD Master Audio, meaning that Dolby Atmos and DTS:X won’t be able to deliver realistic object-based surround sound. DTS Virtual:X, which works with a psychoacoustic process to produce a better immersive experience from a 2.1-channel system, has been added by Yamaha.

The Bose Soundbar 700 comes with a slew of functions, most of which are geared toward its smart speaker capabilities: The integration of Amazon Alexa and Google Assistant is the highlight, and they’re both simple to install using the Bose app by linking your current accounts.

Bose’s PhaseGuide and QuietPort technologies are built into the soundbar itself; the former is designed to convey music to the sides of the soundbar to create a broader front soundstage, while the latter is supposed to offer a more intense, tidy, and distortion-free bass.

When it comes to multi-channel audio, this soundbar falls short: it decodes DTS and 5.1 Dolby Digital, but it doesn’t allow lossless codecs like DTS-HD Master Audio or Dolby TrueHD, and also object-based audio like Dolby Atmos or DTS:X is not supported.

While both soundbars have wonderful features like proprietary apps and control via Alexa and Google Assistant, they both fall short due to the lack of support for lossless Dolby.

Yamaha has been creating soundbars for a long time, and the business is often credited with inventing the idea. So it isn’t surprising to learn that the YAS-408 is a respectable performer – even without lossless surround sound capability.

When it came to TV programs, the YAS-408 delivered, with the 2.1-channel design allowing for excellent stereo separation. This resulted in effects and music that were distributed with a gratifying degree of accuracy over the front soundstage. Despite the lack of a dedicated center speaker on the soundbar, the conversation remained crisp and centered on the screen.

Regarding more difficult surround mixes, the YAS-408 kept a feeling of width and depth at the front of the room. A feeling of surround envelopment was lacking, but because of the active subwoofer and 100W of built-in amplification, the music could be audible enough without requiring any strain while still delivering strong bass action.

Below is a video describing the features of the Yamaha YAS-408:

The Bose Soundbar 700 is equipped with four mid-range speakers, two on each side and a center tweeter. The PhaseGuide technology is on the far left and right, and it’s supposed to broaden the front soundstage, but the company isn’t saying anything about driver sizes or amplification. Using the ADAPTiQ automatic calibration certainly enhances the 700’s all-around soundstage, giving it a nice sense of balance and a dynamic sonic personality with lots of widths and even depth. The stereo separation is great, resulting in some pleasing imaging.

The video below describes the Bose Soundbar 700:

Gaming and movies are areas where this soundbar falls short. Due to the lack of immersive effects, surround channels, and minimal bass, the soundstage here feels more confined. The PhaseGuide technology expands the front soundstage but it affects the imaging, which results in effects sounding less accurate than they would with a more directed driver.

The lack of a separate subwoofer on the Bose Soundbar 700 results in lightweight bass, making the YAS-408 the better option.

The YAS-408 is a great example of how Yamaha is capable of constructing a great soundbar. It’s a well-built 2.1-channel system that provides excellent movie and music performance. The Bose Smart Soundbar 700 is a stand-alone 3.0 soundbar with a greater build quality. It offers a fantastic soundstage and performances in the center channel. However, unlike the Yamaha, it lacks a dedicated subwoofer, which means that if you want more bass, the YAS-408 is a better choice. Unfortunately, neither of these soundbars has support for lossless audio.