Do you fancy watching movies at home? Are you that friend who’s always hosting parties? Well, for either of those, you’ve come to the right place! Today we’re going to be comparing two of my favorite soundbars that are packed with power, and are exquisite when it comes to surround systems. The comparison today is between the Vizio M512a-H6, and the Vizio SB36512-F6. Both being in the 5.1.2 category, while the former is one of Vizio’s M-series. Let’s get into it!

Vizio has several different soundbars that offer Dolby Atmos support. In this price range, it’s a really great proper Dolby Atmos soundbar. Some time back, you had to have a huge home theater set up to get the Dolby Atmos experience. Now you can get it in an affordable soundbar. Sometimes though the Dolby Atmos is virtual, essentially faked through processing and sometimes you get dedicated up-firing speakers. This new soundbar from Vizio is one from the latter.

The Vizio SB36512 F6 is an older model as compared to the M-series. as the name suggests, the Vizio SB36512-F6 is a 36-inch soundbar, a little smaller than its competitor today, and is priced a little cheaper coming in just under $320 on Amazon. But with the cheaper price, it has two 3D audio formats as compared to the M-series which has three. This one only supports the Dolby Atmos and DTS X Virtual formats.

This extraordinary soundbar is available on Amazon for just under $500 (link provided). You basically will need to pay at least double to get any noticeable improvement in sound quality.

Being a slightly older model, this soundbar is priced noticeably cheaper than the M-series, for about $320 at the time of writing (link below). Based solely on price, this looks like a great deal, but you would be sacrificing one of the 3D formats.

Like I always say, you get what you pay for. And if you’re paying an additional $120 for the Vizio M512a-H6, you’re definitely getting a more powerful, all-rounder soundbar that is for sure a better long-term investment.

This is a 40-inch soundbar that due to its big size, providing a bigger bubble of surround sound that covers a larger area. The mesh quality feels really nice, and is better and heavier, whereas in the Vizio SB36512-F6 you could feel that you would poke right through it. Other than that, it is pretty plain and simple, and comes with a minimalistic flatter design for the satellite speakers, as well as a smaller 6-inch subwoofer that still packs a punch. 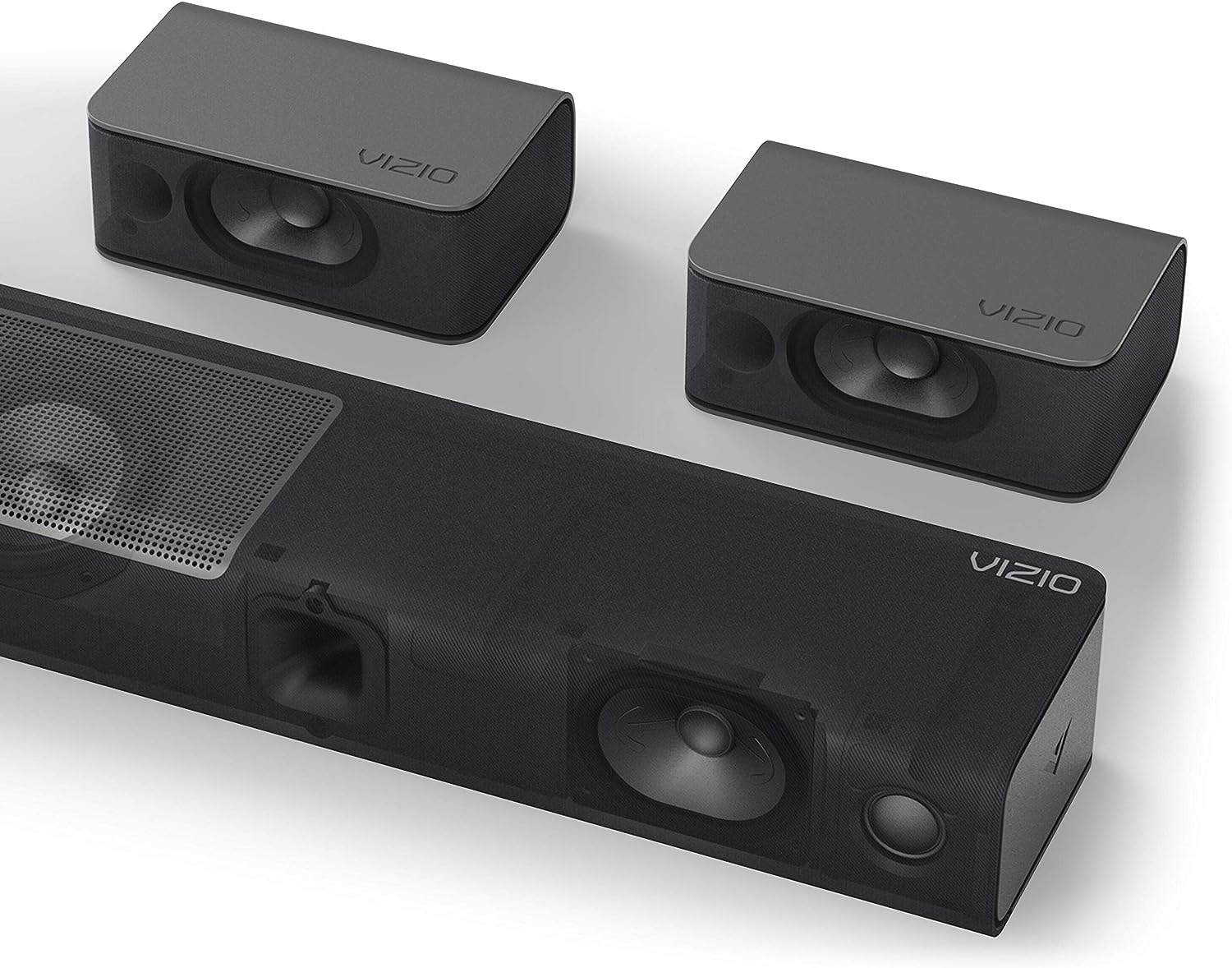 The soundbar and the subwoofer and speakers have really neat looking silver sides that give a very modern look, which is a different aesthetic than most other plain looking soundbars. The remote is also digital, showing the modes you are toggling within as well as controls like bass and treble. The drawback is that it isn’t backlit, so you’ll have to learn your way around it if its dark. Its smaller size enables it to sit on most tv stands without blocking the bottom of the screen. All connections like HDMI arc can hide behind the soundbar for a minimalistic look.

While they’re both minimalistic, I personally feel that the better overall build quality of the Vizio M512a-H6 gives it an edge over its competitor today.

You get everything you need to set this system up in the box and that includes an HDMI cable, and even surround speaker wall mounts if you need them. The system does all the wireless system connections on its own. You just basically connect the cords, and your system is ready to go.

The addition of the up-firing drivers makes a significant difference. The difference between switching the height channels on and off is striking. The sound field goes from flat with no height channels to one with much more vertical presence with the Atmos speakers turned on. Once you hear the difference, you wouldn’t want to be without those height channels, they add a ton.

But in addition to adding height to the overall sound field, one of the things that Dolby Atmos promises is a dome of sound, the sense that objects are passing over you or coming from above you like a helicopter flyover or rain coming down on you. You want that top-down effect from Atmos, and in this regard I find this system not as convincing as the some of the more expensive options.

The bass is remarkably punchy, and tight considering this is just a 6-inch subwoofer. The midrange is very open, the dialogue is extremely clear, and the treble, the high frequencies, have a lot of sparkle, but they’re never harsh. Also, the transition between the sound bar, the satellites, and the subwoofer is about as seamless as you can get. Even the most gravelly, guttural voices, you don’t hear the subwoofer separate from the soundbar and that’s really impressive. Now the up-firing Atmos speakers definitely add height and dimension to the sound, and you won’t want to be without them once you hear them in action, but the system does stop short of delivering the full-on dome sound effect that other expensive options offer. But under $500, I’m good with that. I don’t think you can get a better combination of fidelity, ease of use, and height effects from any other similar price range soundbars out there.

Three 3D audio formats, two that’s purely 3D audio, and one that follows an algorithm that simulates height width and space. That’s the virtual. The good thing is that it’s always on.

It also has a new dialog button as compared to the old center button that you could only turn up the center speaker with, but that would just increase the loudness. But the M-series will emphasize the dialog sound. That is a game changer. Now you can make the dialog crisper.

The surround sound is really good on this. The Vizio SB36512-F6 has an 8-inch subwoofer, which is a little bigger than the 6-inch of the M-series, but in terms of bass quality and throw, I’d say they’re both at par. This suggests the better build quality of the M-series. The satellite speakers are different as the Vizio SB36512-F6 speakers are tall as compared to the flatter design of M-series. But that’s just aesthetics. Personally, I think the taller design looks better. Additionally, they have a height speaker button, so that gives more emphasis.

Let’s say you’re watching TV with the M series, and you turn in to the input where your TV is, it’s going to notice that you’re playing Dolby Digital, so it’s going to detect its not a 3D format but what I can still do is turn on the high speakers, turn on Dolby Digital but use DTS X Virtual which will turn on while you’re watching that tv show and it’ll try its best to still give you a 3D experience.

There’s a music preset as well.

You can control the surround sound too. You can turn it off and turn on the dual mode which basically gives the same sound from all speakers, but my recommended setting for music would be the preset it comes with.

If you know even the slightest thing about home audio, then you have more than likely heard the name Vizio and just how popular their soundbars are, ranging from 2.0 soundbars to full 5.1 Dolby Atmos setups, Vizio is the number one soundbar brand.

The 5 in 5.1.2 are the five main speakers. 3 are enclosed and laid out in front of the soundbar and the other two are the small surround satellite speakers to fill in the sound from behind the listening position. The 1 is the wireless subwoofer that is responsible for providing thunderous low bass. The 2 is the Dolby Atmos speakers themselves, that provides the atmospheric sound overhead giving you a dome of sound around you. They sit on the top of the soundbar angled upwards towards the ceiling for movies and content decoded in the Dolby Atmos sound. The rear speakers do not have up-firing speakers as this is the 5.1.2, but Vizio does have a heftier 5.1.4 version.

My favorite category. I’d say the Vizio M512a-H6 packs a huger punch, especially when comparing both the systems based on the dome of sound effect. The up-firing speakers of the M512a-H6 is the pure icing on the cake when watching an immersive action-movie.

After carefully reviewing both the competitors, it’s fair to say that since they have a sizable price difference, so both of them are definitely worth the money. For a cheaper price tag, and considering its an older model, the Vizio SB36412-F6 is not at all a bad deal. But while the Vizio SB36512-F6 is an upgrade from the built-in TV audio, and worthy for watching movies at home or playing video games, the Vizio M512a-H6 packs a huge punch and has three different 3D audio formats that are exceptionally well placed considering the price tag (goes down to about $400 during holiday season), which is a game changer. If you want something long-term, that will give you joy every time you watch a movie, definitely go for the Vizio M512a-H6, as this is the best there is in this category. For any kind of upgrade, you would have to spend at least double this price tag.