When you are in the market for a proper soundbar, you just don’t want average output, or good-looking soundbar speakers to place under your television just for aesthetic’s sake. No sir! You want something that not only looks good but sounds great as well. And by sounding great I mean surround sound with deep bass and everything.  But here’s the thing, though.

There are plenty of soundbars available in the market that only offer average output and bass. But to take your home entertainment system to the next level, you need to turn your focus on speakers such as the LG SP11RA or the Samsung HW-Q950A.

So what about these two soundbars is so interesting and why should you consider taking the best one home? Good question! Let’s dive straight in. 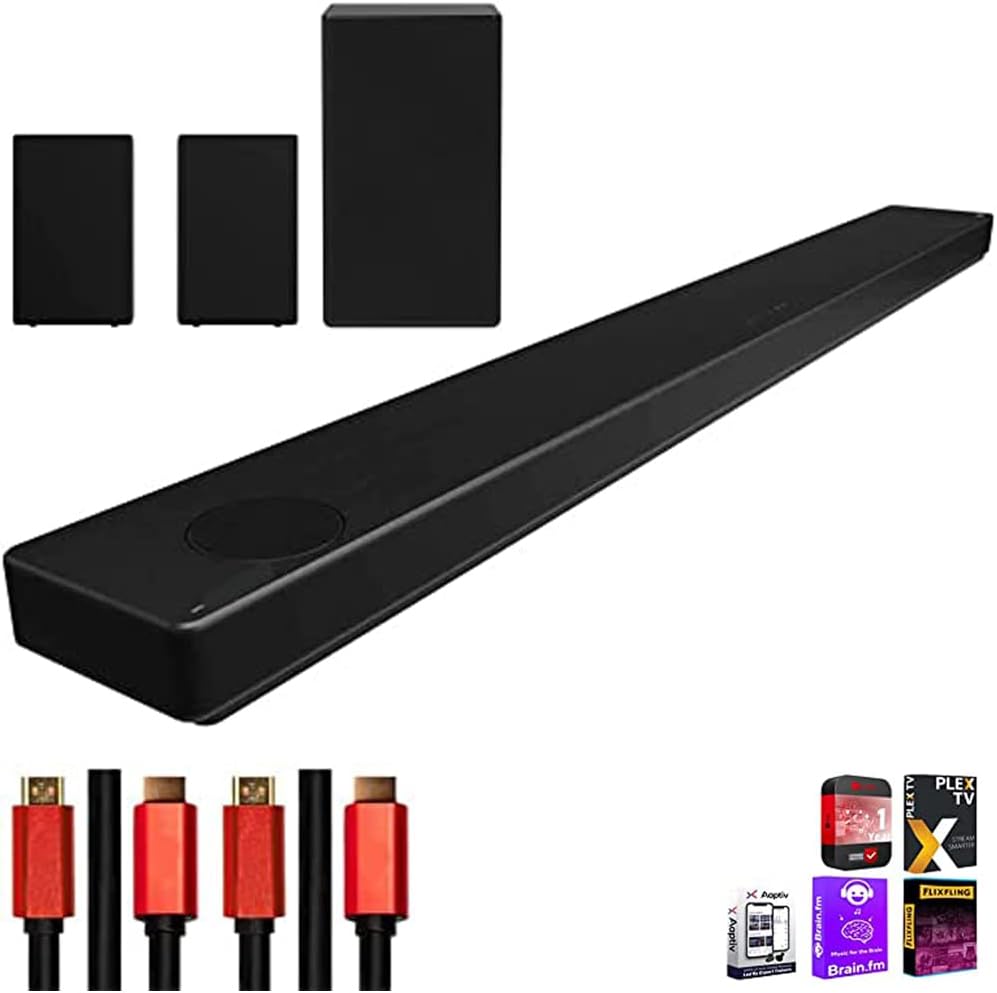 The LG SP11RA will cost you around $1,496 on Amazon. Not the cheapest product in the market. So it’s only fair if we answered the next logical question – is it worth the price? Our answer is a resounding yes. 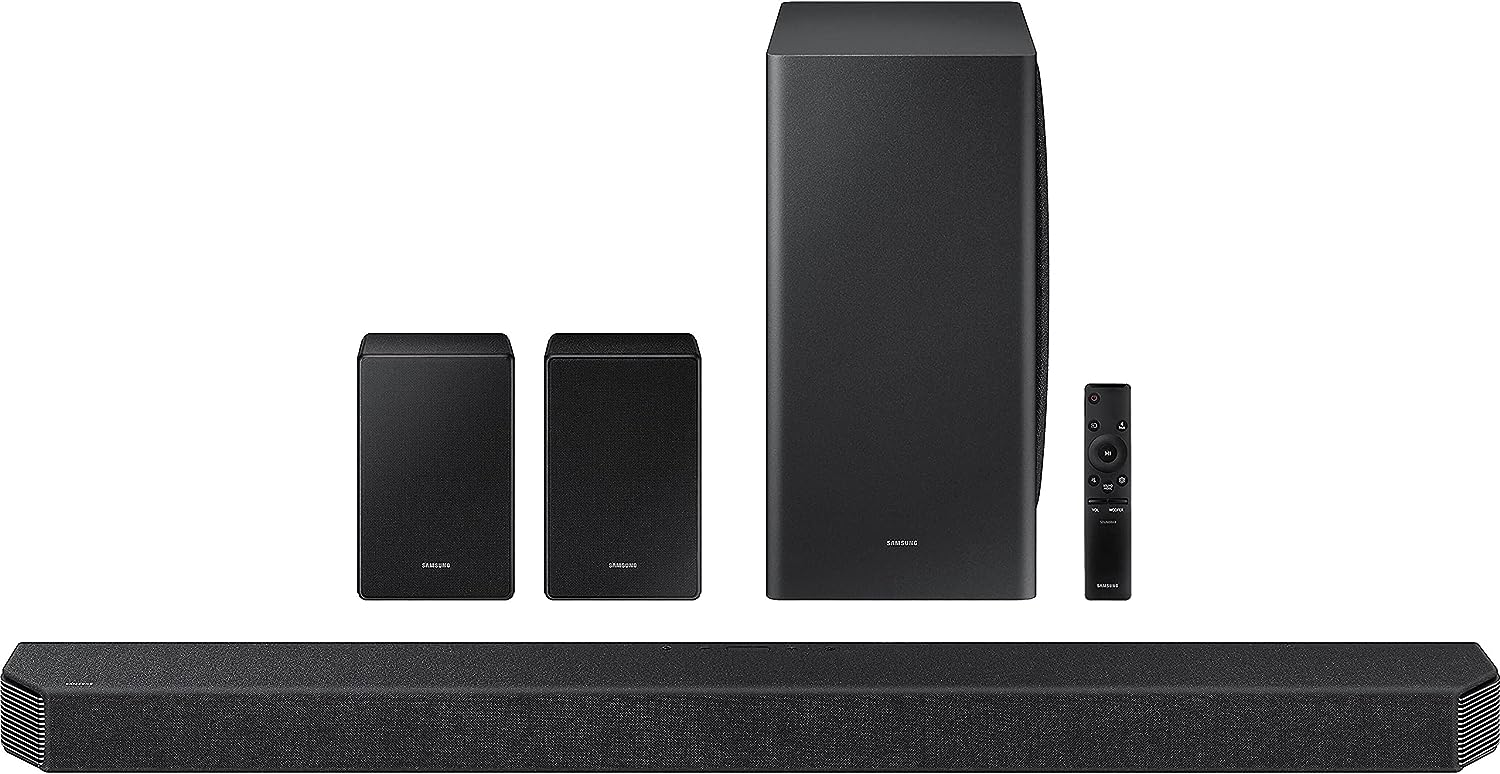 But how does the Samsung HW-Q950A compare? The price is very close to the LG at $1,499 on Amazon. Is the price justified? We would also say yes. It comes with an impressive number of channels and output which we shall look at later.

Simply put, the Samsung HW-Q950A will blow your mind.

Both the LG SP11RA and the Samsung Q950A are impressive soundbars. Granted their prices are high but considering the output and features, their cost is justified.

The Design and Features

Let’s start with the LG SP11RA.

It features the main soundbar and the subwoofer. The soundbar has a smooth gray top and grill-like black sides which give contrast resulting in an overall great-looking sound system.

The first thing you’ll notice about the LG SP11RA is how wide it is. However, it is also quite short and will slide easily under most TV screens.

The LG SP11RA also features an LED display screen that lets you see the volume, power, and other speakers settings.

The subwoofer however doesn’t come with any outstanding design features and pretty much looks like a plain box to be kept under the sideboard or in a corner. But does the Samsung HW-Q950A do better in terms of design? 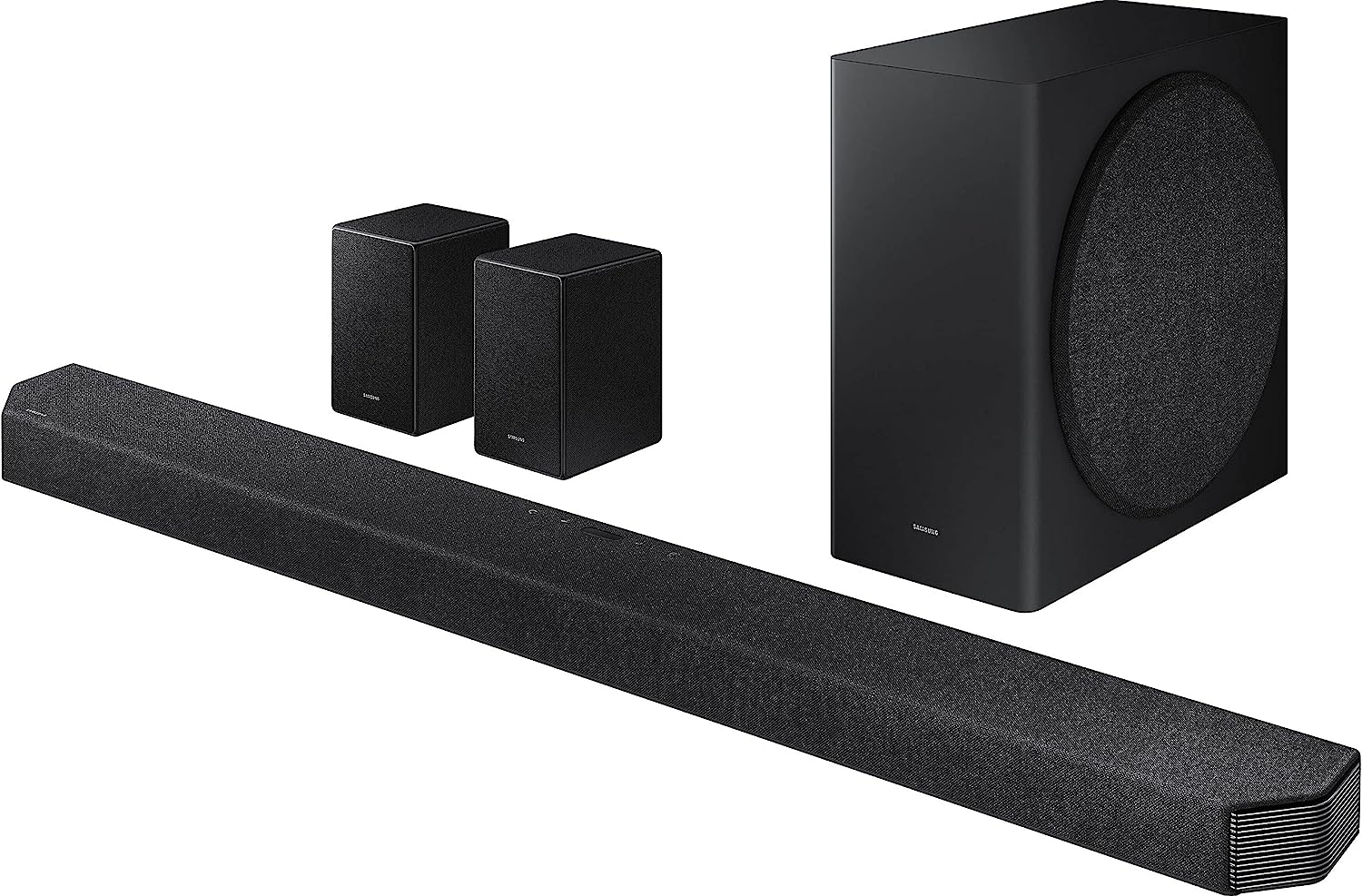 The sheer number of channels on this soundbar will blow your mind to the moon. 16 to be precise! It has three forward-facing speaker drivers, two upwards-facing speakers, and two side-firing speakers. It also has two front-firing speakers that are set at an angle to help bounce sound from the walls. And no we are not done yet!

The Samsung HW-Q950A also features two satellite speakers. Sure they look small and compact but each of these has three speaker drivers. One fires up, one fire to the rear, and a third fires to the front.

Okay so here’s the thing. The Samsung HW-Q950A has the most speakers than any other soundbar known to date  But if you have a more recent Samsung television you can even combine your TV speakers to provide more sound to the front courtesy of the soundbars Q-Symphony feature. And we haven’t even gotten to the subwoofer which we shall take a look at a little later on.

Okay the LG SP11R is a great speaker with a lot of power output. But the channels on the LG are dwarfed compared to the 16 channel Samsung HW-Q950R. The Samsung here takes the sure win as far as design features go. Plus the LG subwoofer looks pretty basic in design even while the soundbar itself looks neat and stylish.

The output and performance

By now you are probably wondering if all those channels of the Samsung HW-Q950A are worth it. Absolutely!

First off, with all those many channels, there is still no interference or distortions. Everything works in perfect unison. The sound is coming from up, down, left, right, front, and back resulting in perfect surround sound that is impressive just to hear. And the speakers are so loud that you probably won’t use the high volume as it can be uncomfortable to the ears. This is all thanks to the 616 watts of output. The sound is clean and crisp whether at low volumes or high volumes.

The Samsung HW-Q950A supports Dolby Atmos and DTS:X formats. It also features an adaptive sound that adjusts to the scene at play meaning that you can hear everything without having to rewind.

The LG SP11 on the other hand produces 770 watts of output which is more than enough for a home entertainment system. It is by no means small and will even outperform the Samsung HW-Q950A.

What’s more, the LG is also able to play a huge range of audio formats. Like Samsung, LG will also play Dolby Atmos and DTS:X formats.  That said, the speakers do seem to struggle a bit with extreme basses causing the subwoofer to sound boxed in.

On the upside, the LG SP11R has a room calibration feature that allows the soundbar to adjust the audio to best fit your room. Furthermore, you can also use the EQ presets.

As far as power goes, the LG SP11R takes the win with its 770 watts of output. However, the Samsung still offers more channels than the LG and as a result, has better surround sound.

You get two HDMI ports with the Samsung HW-Q950A. These let you connect more devices to your entertainment system. Keep in mind, however, that you will not be able to connect older advises that used the AUX port.

The LG SP11R also offers two full HDMI ports. But you can also use the USB port to play media from your thumb drive.

Both the Samsung and the LG subwoofers connect to the soundbar wirelessly. You will however need to connect the subwoofers to an outlet. But how about the satellite speakers?

These also connect wirelessly to the soundbar both on the LG SP11R and the Samsung HW – Q950A. However, you will need to connect them to an outlet.

Both soundbars do well in connectivity. The satellite speakers and the subwoofers connect wirelessly on the soundbars. The LG SP11R however offers more connectivity options.

The Samsung HW-Q950A has a small display on the top that tells you the level of volume and other inputs. It also features physical controls which you can use to adjust the volume and change settings. And the great part. It comes with a universal remote. While you can use it to control all the features and settings of Samsung HW-Q950A, you can also use it to control your TV. While it has Amazon Alexa but doesn’t have Google Assistant or Apple Siri.

The LG SP11R also has a display that informs you of the level of volume and other inputs as well. It also has buttons at the top. But unlike with the Samsung, these are touch-sensitive. You can use these to adjust the level of volume, Bluetooth, and wifi settings. While the LG SP11R does come with a remote that lets you control most of the features of the soundbar, it is not universal which means you cannot use it on your TV. It doesn’t have voice control which means no Amazon Alexa, Apple Siri, or Google Assistant.

The Samsung HW-Q950A offers a wider array of features than the LG SP11R. Granted many of us won’t end up using some of the features, but it doesn’t help to know all the options you have to up your home entertainment system. The Samsung is the clear winner.

The LG offers a larger output of 770 watts. It outperforms the Samsung’s 616 watts. That said the Samsung HW-Q950A has an absurd number of channels that will leave you simply flabbergasted. As a result, it offers a much more immersive and better surround sound.

Not to mention that the Samsung HW-Q950A has a wider variety of features compared to the LG SP11R. All that put into consideration and keeping in mind that these two soundbars cost pretty much the same, you are better off with the Samsung.