I know that this Sonos Arc vs Sony HT-X8500 battle I have for you today may seem a little strange. The reason I say this is because these are at two pretty different ends of the pricing spectrum, but I sometimes think having something like the Sonos Arc going up against a more wallet friendly soundbar like the Sony HT-X8500 can be pretty interesting to look at. Not just in terms of the sound or the way they look, but in value for money as well. These are two damn fine soundbars so I am really looking forward to sharing my thoughts on this match up down below.

I have to say that price is perhaps the most interesting category in this Sonos Arc vs Sony HT-X8500 contest. These are radically different when it comes to how much they cost. So much so that they are pretty much in completely different categories and aimed at different types of people! 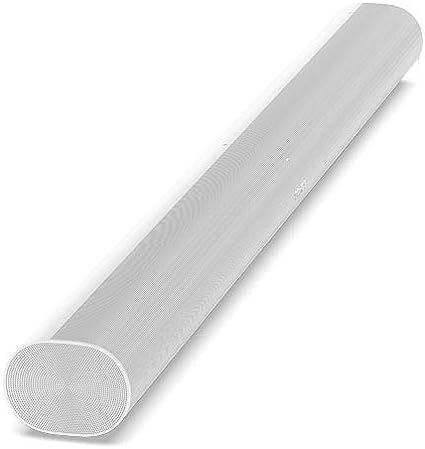 I am pleased to say that the spike in the price for the Sonos Arc seems to have gone. This is usually priced at $799.99 and it has managed to keep this price since the day it was released due to its immense popularity. However, during the Covid-19 thing, the price for this spiked and it was being sold for over a grand by many people. Thankfully, that craziness seems to have died and you can get this for its RRP on Amazon. You can also find this from other stores and even eBay, but very rarely does it go for much below that $799.99.

Sony HT-X8500: When it comes to value for money the Sony HT-X8500 has to be in contention for the best price of a Dolby Atmos soundbar!  The RRP on this thing is $199.99 and that is not a typo, a Sony Dolby Atmos soundbar for 200 bucks is just insane to me. The thing is, this can be hard to find as it is so popular given its price. I have not seen this in stock on Amazon for well over a month! Walmart is your best bet, but you can also try eBay, but they tend to be sold for more than the $200 RRP.

The Verdict: This is a tough round to call. I say that because I feel that 800 bucks for the Sonos Arc is actually a great deal as it really is one of the best Dolby Atmos soundbars I have had the pleasure to use. However, the Sony HT-X8500 is just phenomenal value for money, it clearly cannot match the Arc in terms of sound quality, but for someone looking to add Dolby Atmos sound to their home at a more affordable price, it is near impossible to beat the asking price here.

These are two very different looking soundbars which is going to make this Sonos Arc vs Sony HT-X8500 design round pretty tough to call. I feel when two products are as different as these are, it really all comes down to personal preference.

I always like to say how much I love the design of Sonos soundbars and for me the Sonos Arc is the best of the best when it comes to the soundbars that Sonos offer. It is a pretty impressive unit with a nice heft and feel to it and it comes in at 45” x 3.4” x 4.5” so it is very attention grabbing. The Sonos Arc is available in white and black, with the white version being the one I have used. However, if you want to see the black one, check out this Unboxing SONOS ARC video. What I think captures your attention with the Sonos Arc is how curvy and stylish the soundbar is. The way that the plastic grill just wraps around the soundbar is a very cool effect and something that makes this a real showcase soundbar that will look awesome no matter if it is in a living room or a home theatre. The whole soundbar just has a real air of class about it that makes it one of the most iconic looking soundbars on the market today.

Sonos also have made sure that the back of the soundbar is just as great as the front. The way that they have kept things “basic” around the back is actually something that I really do appreciate. You only have your power input and a single HDMI port! This at the end of the day is a Dolby Atmos soundbar and that means you need to use HDMI if you want to take advantage of that. However, Sonos does also give you a special little HDMI to optical cable for those that do have a desire to hook this up to their TV via an optical cable. As far as the design of the remote control goes… there isn’t one! You have to use a smart device to control the soundbar which I am not a huge fan of if I am being honest.

The Sony HT-X8500 is a bit smaller in the width department than the Sonos Arc, but it is a little “thicker” as this is 37.25” x 6.75” x 6.25”. I am a huge fan of the way this soundbar looks, Sony always makes great looking sound equipment. This has a drastically different design to the Arc as this is much more angular in its design. I love the way it has a metal grill that covers the front and then wraps around the front part of the sides of the soundbar. It gives this a very smart and stylish kind of look. On the top, Sony has got a bit too artsy for their own good here in my opinion. You have this strange material that has a pleather feel to it. It does look pretty cool, but I am sure this is going to end up caked in dust if you do not keep your maintenance up on this. I have seen glass and plastic on top of a soundbar before, but this is quite unique.

The Sony HT-X8500 has both an HDMI and an optical port on the back of the soundbar. You also have a USB port in case of any updates and your standard power port as well. As this is a soundbar that has a built-in subwoofer, you do have open areas on the side to accommodate this. One area where the HT-X8500 wins by default is with the remote control. However, saying they win by default is a bit harsh as this comes with a fantastic remote control that gives you all the control you need over the soundbar with many of the features being activated with a single button press.

The Verdict:  This is a very tough one to call as they are so different. I feel that the Sonos Arc is just awesome in its design and I am having a hard time of thinking of anything that they could do to make it better, perhaps adding a metal grill? The Sony HT-X8500 has that Sony class all over it and it so nearly takes this round, but I am just not a massive fan of that faux leather top. If it was just plain plastic, Sony would have actually taken this round.

We come to a round (our final round actually) in this Sonos Arc vs Sony HT-X8500 battle that is very interesting. The sound capabilities of these soundbars are not really comparable, there is 600 bucks difference between the two so it does feel a bit harsh! However, we have made it this far so let’s take a closer look at how I found the sound (hey that rhymes) of these soundbars.

Sonos Arc: Want to know something crazy? The first time I checked out the Sonos Arc I was not sold on it!  It is one of those things where the more I have gotten to use it the more I have come to love it. For under a thousand bucks, I am not sure there is a better Dolby Atmos soundbar on the market right now. This thing is just awesome and it has some real power to those up firing speakers that do a great job at filling the room with sound. Take a movie like Sonic the Hedgehog, for example, any action movie like this actually really does sound so much better when you have it pumped through something like this. It is not even just movies with a dedicated Dolby Atmos track, everything sounds great through this. Also, for a soundbar that does not have a built-in subwoofer, this thing has some serious kick in the bass department as well.

I have to be real with you and say that I have probably watched over 100 movies with this soundbar so I know it inside and out. A recent movie I picked up is Nightmare Alley and a movie like this really does make you wonder how you ever managed with just a TV’s speakers. The vocal clarity offered by the Sonos Arc is something that I have a hard time describing. There is just no way in hell you can go back to your TV speakers after using this! Vocals manage to stay nice and clear when there is a lot of action going on in a scene as well.

Sony themselves made this great (and thankfully pretty short) Sony Single Soundbar HT-X8500 Official Product Video that gives you a closer look at what they have done with the Sony HT-X8500. Look this is the best bang for your buck when it comes to a soundbar that offers Dolby Atmos. However, the Dolby Atmos this provides while good, is clearly not at the level of something like the Sonos Arc. The wife and I watched the 4K release of Batman Forever with this and it was very impressive. It managed to more than hold its own, even when cranked up loud. I do think that the built-in subwoofer does offer a bit more power which can help keep things more balanced. If you take this on its own merit, the Dolby Atmos is great, but when side by side with the Arc, you do notice quite a difference, I would say you would probably notice it even more if you were using it in a larger room.

I really cannot praise Sony enough for what they have managed to do with the Sony HT-X8500. A movie that my wife loves (I am sure she has a girl crush on Blake Lively) is The Shallows which is an awesome shark movie. Anyway, the sound effects of when she was under the water and the general “nature” sounds really did fill the room very well. Vocal clarity is great here and Sony on their remote control does give you a nice number of presets that you can play around with. This is worth doing as we are all different so what sound profile you like best will probably be different from the one that I like. Look, this is a fantastic soundbar and for someone or a family that wants a Dolby Atmos soundbar to bring the movie theatre home, but at a more affordable price will not be able to top this.

The Verdict: Man, this feels like a really harsh round. Look, there is no denying that the Sonos Arc is the winner here. While I have focused on the Dolby Atmos capabilities, the fact of the matter is the Sonos Arc has a much more balanced and better sound profile in every regard. However, that does not mean that the Sony HT-X8500 is bad, it is far from it, especially when you consider the very reasonable asking price it has.

What Is The Better Soundbar?