No matter if you have a budget priced under 50 bucks ByronStatics Vinyl Record Player or a more expensive Audio-Technica AT-LP120XUSB-BK. Chances are at some point you are going to have to get a new stylus or even upgrade if you want a better sound coming from your turntable. The thing is, styluses come in all shapes and sizes and cater to all budgets. Some people may want to get an Audio-Technica AT-VM95C Dual Moving Magnet Turntable Cartridge that costs $39 and be more than cool with that. However, others may want to drop some serious money such as the over 400 bucks this Audio-Technica VM750SH Dual Moving Magnet Shibata Stylus Stereo Turntable Cartridge costs!

The thing is, turntables can be a bit on the finicky side and many people can sometimes get a distorted kind of sound. When you just want to kick back and listen to some tunes, this can be annoying as hell! However, do not worry as today we are looking at some of the common reasons as to why your record player may sound distorted and also looking at a few ways that you can try and fix the problem yourself!

Ok, so this one is very obvious, but if you have just bought a new Ortofon 2M Red Moving Magnet Cartridge and the sound is not what you think it should be. Try using the cartridge you had before (if it is still working) on the same record you noticed the issue with. If the sound is still distorted in a similar manner, you know that it is not the new cartridge that is causing the issue. It may be worth also borrowing a cartridge from a friend, this way you can know for sure if the cartridge is the issue.

Your Record Could Be Ready For Retirement!

One of my favorite albums of all time is Appetite For Destruction by Guns n Roses, actually, it is my favorite album of all time! The remastered version is currently the version I will play if I want to rock out with Axel Rose and the boys! Anyway, the point I am making here is that I do have an original 80s first pressing of this album that has been in my collection for over 30 years at this point. The thing is, that album has been played to absolute death and it sounds like garbage due to all the years of a stylus wearing down on it. Nothing I can do can bring this album back to life, it now just sits in my collection as an awesome collector’s piece! If it is just one record that sounds distorted, I would say that there is a 99/100 chance that it is the actual record and not your equipment.

As someone who buys a lot of used vinyl from places like thrift stores and flea markets, this is something I do run into quite a lot. Just recently I found a copy of New Jersey by Bon Jovi at a flea market and while the album cover was in mint condition, the actual record was far from it. You need to develop a good eye for being able to tell if used vinyl is going to actually play right. Of course, this is all part of the fun of being a vinyl collector!

Are You Taking Proper Care Of Your Records?

There is no point in spending a ton of money on a cartridge like this epic Ortofon 2M Black Moving Magnet Cartridge if you are not going to be taking care of your records! Ok, so I am pretty OCD about my record collection, but I have bought many products over the years to keep them in tip-top shape. There are a ton of record cleaning kits like this Vinyl Buddy Record Cleaner Kit on Amazon and having something like this with your records is essential in my humble opinion. If you really want to go all in on keeping your records clean, something like this Spin-Clean Record Washer would be great! Taking care of your records is an essential part of the hobby and as this How to Clean Vinyl Records video shows, it is not as complicated or time consuming as you may think. I have bought used records before and at first play, they sounded terrible. However, a quick clean and a bunch of dust and dirt out of the grooves later and they are sounding much better which brings me to my next point.

Is The Stylus Dirty?

Be honest, how often do you actually look at your record player stylus? If it has been used on a record that is all dirty and gross, that stuff can get on the stylus and prevent it from making a proper connection and this leads to a rather strange sound. A prime example of this happened to me last summer, my wife found a copy of The Immaculate Collection by Madonna at a thrift store for three bucks! Being a huge Madonna fan, she snapped it up. Anyway, this thing had certainly seen better days and it was filthy. Of course, my wife did not check before she put it on the record player and it ended up making the next few records sound weird, the reason for this was a layer of dirt/dust got on the stylus which until it was cleaned, caused each record to sound less than great! 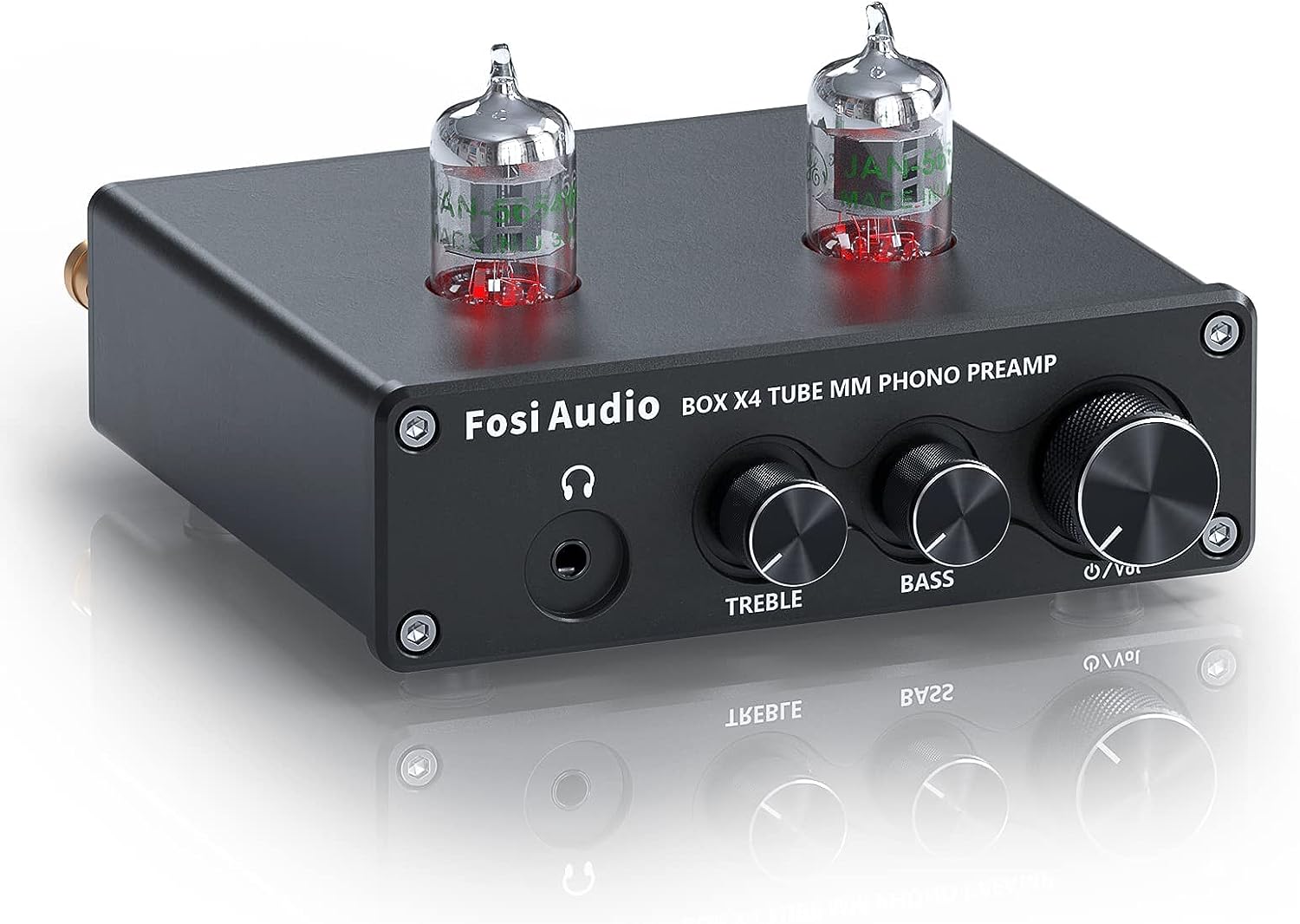 Ok, I have to be real and say I would be very surprised if your distorted sound is something to do with your preamp, but it has been known to happen so it is best to rule it out. The easiest way to test if it is an issue with your preamp is to connect a set of headphones to it. Most preamps like this Fosi Audio Box X4 Phono Preamp have a headphone jack on them. If the sound you are getting is that same distorted sound and you have already tested the records, cleaned them, and looked at the stylus. Then it probably is an issue with your preamp. Testing and fixing this issue is much more complicated and more often than not you are better off just buying a new one, however, if you have spent a few hundred bucks on your preamp, you may want to take it to a professional to get it fixed instead. As I said, I think the chances of your distorted sound stemming from your preamp are slim, but it can happen.

Look, when it comes to any kind of technical issue no matter if it is with an ANGELS HORN Turntable, a Samsung 4K TV, an LG BP350 Blu-Ray Disc Player, or even a Nintendo Switch! The first go-to of “tech support” is always to turn it off, unplug everything, leave it a few minutes, plug it all back in, and see if it works better! With turntables, there is a bit more to this as you do not just want to unplug the power, you really want to unplug the stylus and make sure when you plug it back in that it is connected properly. If the stylus is not attached to the tonearm properly, it is going to sound weird! You will be amazed at how many technical issues can be solved by just making sure everything is connected as it should be!

I have been collecting vinyl since I was a kid and my dad gave me all his old records when we got a “fancy” Sony CD player in 1990 (which was one of the best on the market at the time) which you can see in this CD player SONY CDP-297 video, man I would love to track one of these down to have in my collection.

Anyway, in all the years I have been tracking down records, especially those that come from places like thrift stores or flea markets, I tend to come across more dirty and gross ones than clean ones. Learning to clean and look after vinyl is an essential part of the hobby. Yes, “technical” issues can happen such as a failure of the stylus, preamp, or the whole damn turntable itself. However, more often than not, it is the record that is going to be the real culprit of that less than great sound you are hearing.