Hey Everyone! Are you come here to look for the best soundbar that not only sound good but also brings together your studio setup? Then this is it guys as here, we are offering you a battle between one of the bests. So, today its comparison between Samsung Q700A and Sonos Beam. Sonos is a well-reputed company and are best known for there wireless multi-room Sonos system. Meanwhile Samsung needs no introduction as it is a well-known and well-reputed global company known for the production of their quality products. So, buckle up guys because this is a good one.

Plus, here’s another one the fierce battles of the best sound system we had before, the comparison of Logitech Z407 and the Logitech Z623. Now back to the battle.

In a nutshell, the Samsung Q700A is the winner according to our opinion but it’s not the same for everyone as everyone’s requirements are different and maybe the Sonos Beam suits you better. But in order to find that out you have to continue reading.

The design of Samsung Q700A is very much similar to Samsung HW-Q70T and is overall quite sleek. It is wall mountable and the hardware is included. The sound dimensionally is 38.6 x 2.4 x 4.5″ / 98 x 6.1 x 11.4 cm and weighs 7.9 lbs. Meanwhile the subwoofer dimensionally is 8.1 x 13.9 x 11.9″ / 20.6 x 35.3 x 30.2 cm which is almost the same size as a PC and it weighs 12 lbs. The bar is made up of hard plastic and the subwoofer of wood but the body has a metal grill that covers the top and front of the bar. The Samsung Q700A includes no satellites but the Dolby Atmos Wireless Speakers can be purchased separately. Overall, it has a typical Samsung look which is sturdy and of good quality. It also has a fabric for protection from the dust and humidity. The Samsung Q700A comes with a remote. 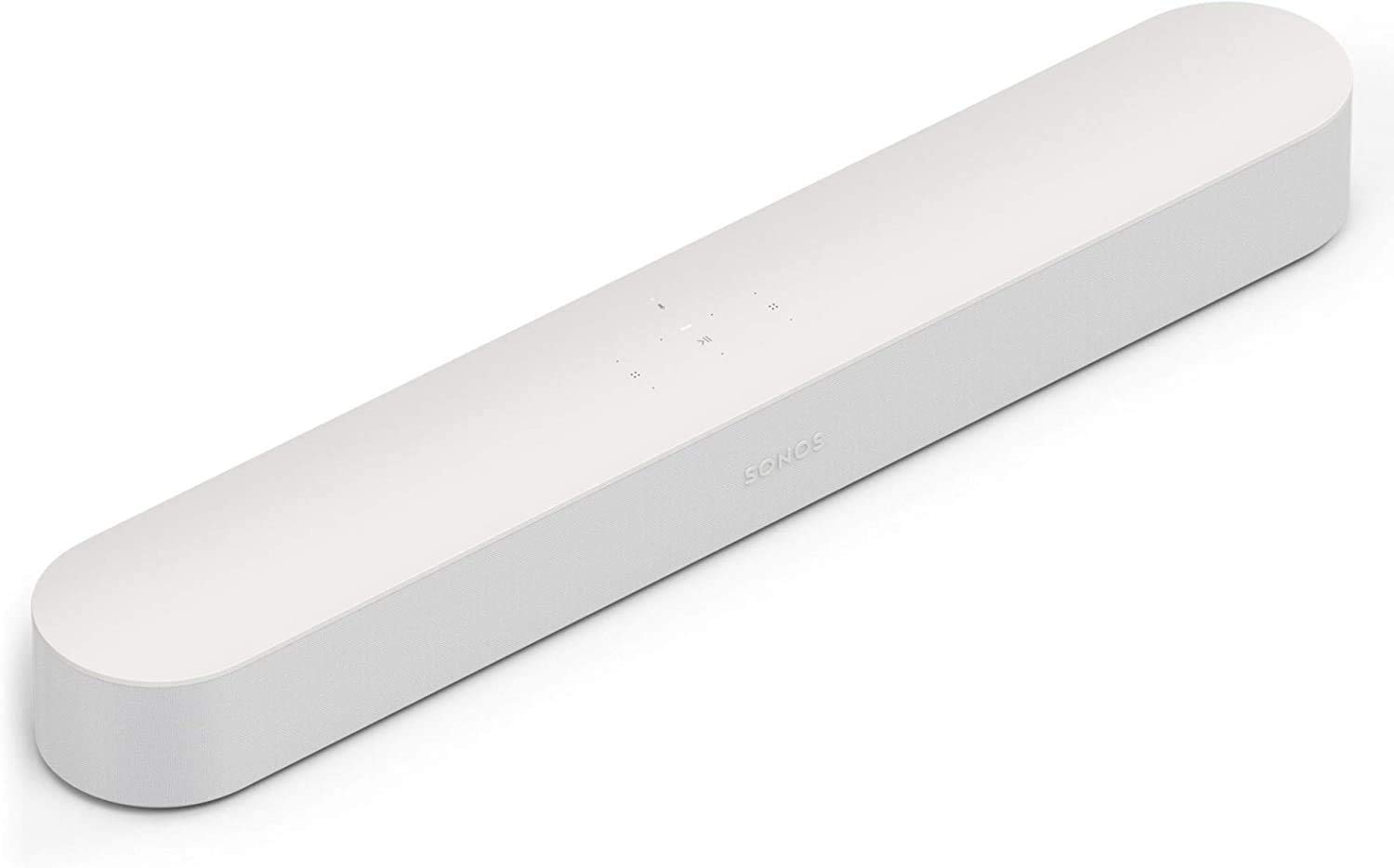 Sonos Beam in terms of design is significantly known to a be much smaller and lighter than the new Sonos Arc. Just like every other Sonos product, the beam looks very stylish but is understated. Even though the new Sonos arc takes the most convincing claim of being the best looking among the Sonos products, the Sonos Beam is still better than either the Playbase or the Playbar. Unlike other soundbars the Sonos Beam doesn’t require a lot of space and fits easily in your entertainment center as it is light and small. It is also wall mountable but the official bracket cost is quite steep. The Sonos Beam is available in black and white colors and it weighs 6.2 lbs. Dimensionally it is 2.72 in (69 mm) x 25.63 in (651 mm) x 3.94 in (100 mm). It comes with a product information manual and a warranty.

In the battle of design, even though the Samsung Q700A is nicely built but the Sonos Beam comes off as the clear winner. It is much smaller and lighter which gives it an edge because of its size as it is able to overcome the usual limitations.

The sound profile of Samsung Q700A is relatively neutral however in low frequency range it gains a little. This soundbar is suitable for most audios like gaming, movies and music but it has difficulty producing deep bass sound.  If you prefer neutral sound then it is recommended to use it on default settings because even with different settings the Samsung Q700A is unable to produce sound that is close to perfect. If you’re looking for soundbar with good bass production then we recommend you the Samsung Q800A. The Samsung Q700A has good focusing and stereo performance. It is pretty loud and great for parties however there are some distortions in the low and high frequency range but that mostly depends on the input content. The acoustic panel is pretty nice but there no software upgrades overall.

As for Sonos Beam, it is important to make sure that all of your sources are sending Dolby Digital signals to your television, and that the TV can accept and send them to the Beam regularly. It is a complicated process depending on the devices involved however worth it because making the effort as Dolby Digital signals result in a far better performance. Normally during the installation process of Sonos speakers you’ll be tempted to tune the Beam’s sound using the company’s Trueplay system. The Trueplay system uses the microphone of your iPhone, as it is not available on android yet, and tailors the sound to your room or to your usual listening areas. The Sonos Beam sounds exceptionally good and that’s because of its size it is able to overcome two of the usual limitations, scale and weight, of a compact speaker. Even though it has a deep and solid bass, it keeps the commentary crisp and clear. It can even go louder without distortion.

In the battle of the better sound quality, honestly speaking both are strong candidates but the Samsung Q700A wins because of its bass production, stereo performance and it’s good focusing.

For the features portion the Samsung Q700A has a nice set of features that helps with sound enhancement. Graphic equalizer can be used for fine tuning, you can also use one of the presets Standard, Surround, Game Pro and Adaptive Sound for equalizer. The SmartThings App has an advanced sound setting and there you can find the Voice Enhancer feature that makes the dialogue clearer. In addition to all this the Samsung Q700A has a feature that is a virtual surround technology advertised for immersive sound, it is known as Acoustic Beam. The panel has a SpaceFit sound function and when you connect the panel with a compatible device, it analyzes the acoustic characteristics of your room and optimizes the sound reproduction. This soundbar has multiple physical connections. It supports many audio formats through HDMI ARC port. High quality sound formats like the Dolby Digital Plus and DTS: X, which are found on Blu-ray discs and streaming resources, are also available for playback.

As for the Sonos Beam, it can be described as a typical Sonos product. This isn’t just a simple soundbar, it’s a multi-room wireless speaker which can play music from Spotify, Tidal, Apple Music, Amazon, Google Play, Deezer, your phone, network-connected hard drives or simply put it can play music from any source. The soundbar has a touch control on the top that allows to play/pause, adjust volume and microphone mute. The LED indicates the soundbar’s status, voice feedback and the mute status. The Beam soundbar can also be connected to your TV. Unlike the Playbar and Playbase which only offers a digital optical connection, the Sonos Beam from the newer arc has an HDMI. The main purpose of the HDMI is to receive audio from the TV, using the Audio Return Channel. It already supported Siri from the launch but now it supports all the available voice assistants like the Amazon Alexa and the Google Assistant. The only complain about Siri is that you cannot send commands to the Beam directly, and you will need to use your iPhone as a microphone to command Siri. Sonos hasn’t upgraded the audio codecs and it does not support DTS.

For the battle of features and connection, the Samsung Q700A again comes off as the winner as it supports high quality formats like the Dolby Digital Plus and DTS: X and its graphic equalizers. Not only this the SmartThings App also gives it an advantage.

The Samsung Q700A costs $619, it is quite expensive but above that it uses a lot of technology to make extremely sophisticated sound that justifies the price.

The Sonos Beam at the time of launch costed $399 but now it can be found at discounted at various places. As intended from a $399 soundbar it gives the perfect scale, dynamics, detail and punch.

Overall, it is safe to say that the Samsung Q700A is the better soundbar then the Sonos Beam. Samsung did a nice attempt at creating a soundbar which has a compact enough design that is easy to use and not only that it is able to perform at high standards as any unit bearing the Dolby Atmos logo should perform like. Even though it’s not the same other soundbars from the same series, the sound signature and overall performance makes it very much ideal for any kind of use. Samsung Q700A works efficiently to enhance your entertainment experience.